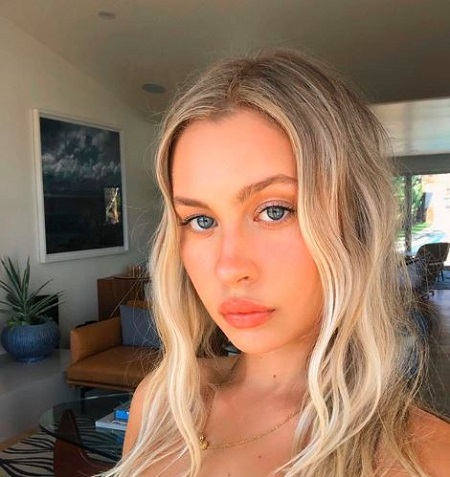 Natasha Bure is a rising America actress, model and author who is best known for being the eldest or single daughter of Candace Cameron Bure, and Valeri Bure. Her mother, Candace is an actress, producer, talk show and author who is recognised for starring as DJ. Tanner on ABC's TV sitcom, Full House. While her dad, Valeri is a retired ice hockey player who played 10 seasons in the NHL.

Dating Anyone Or Not?

Twenty-two years old Natasha Bure is reportedly unmarried woman and is probably single. Nevertheless, she has not mentioned anything related to her boyfriend to any social platforms or in an interview.

Bure keeps herself busy with a lot of work and rarely gives a glimpse of her private life. Even scrolling through her social media, there are no hints about her romantic love affairs with any lovers. Her posts mostly feature of her family and work images.

She is a Big Sister Of Two Siblings

Yes, Natasha is blessed with two younger siblings. Both of them are brothers. On 20 February 2000, her brotherLev Valerievich Bure who is four years junior to her. He is now quite busy on his college days.

Her next brother Maksim Valerievich Bure was born on January 22, 2002. Now, Lev, 20, is engaged to his beautiful girlfriend, Taylor Hutchison. She is an actress who is known for Little Wild West (2016).

On August 30 2020, Lev proposed to Taylor and posted the photo of getting down the knee on his Instagram account. He wrote: "All glory to my Lord and Savior Jesus Christ! I cannot wait to be your husband!".

Candace, 44, and Valeri Vladimirovich, 46, first met at a charity hockey game in 1994. They were first introduced by Candace's Full House co-star Dave Coulier.

Finally, the lovebirds walked down the wedding aisle on June 22, 1996, in a hush-hush ceremony surrounded by their loved ones. Since then, they have been living a blissful life with no sign of divorce. On June 22, 2020, they have celebrated their 24 years of a marriage anniversary.

How Rich is Natasha Bure?

Despite being a celebrity kid, Natasha Bure has established herself as a well-known actress in the entertainment industry. She has acted in several TV series which might have helped her to uplift her assets. As of 2020, her net worth is assumed at $100 thousand.

Bure is highly active in social accounts and has over 528 thousand on her IG account. She is making good bucks from various endorsements deals and promotional works on Instagram. In addition, she has a YouTube channel under the name Natasha Bure where she uploads vlogs of original content.

As of now, Natasha has 253K subscribers. As per social blade, her yearly earning is estimated from $1.6K to $24.9K. Apart, she was selected for Adam Levine's team on the blind auditions and completed on The Voice: The Battles Premiere, Part 1 in 2016.

Her parents, Candace and Valeri Bure share the combined net worth of $14 million as of 2020. Cameron is famous for playing the role of D.J. Tanner on the sitcom Full House. So, she reportedly received $30,000 per episode.

More to that, the retired ice hockey player Bure took home just over $22.5 million in salary during his career in NFL. Also, he bagged $3.1 million from Florida Panthers between 2003 to 2004.

She was born on 15 August 1998 in Los Angeles, California, the United States as Natasha Valerievna Bure. She is a granddaughter of Vladimir Bure, Barbara Cameron, Tatiana Bure, and Robert Cameron.

Her uncles are Kirk Cameron, an actor, and Pavel Bure, an Ice hockey player. Growing up in Hollywood, Natasha always wanted to pursue a career in entertainment so she started doing commercials as a child.