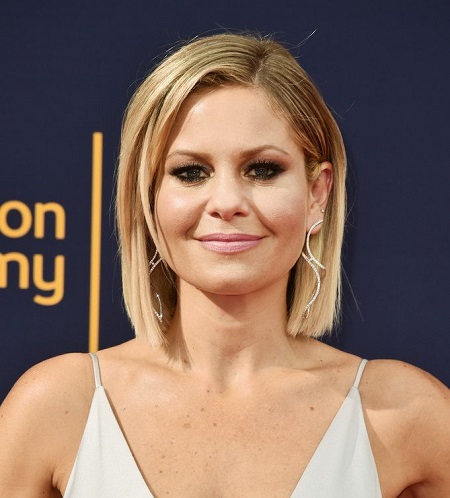 Candace Cameron Bure is an American actress, producer, talk show and author who is famous for starring as DJ. Tanner on ABC's TV sitcom, Full House. It ran originally ran from September 22, 1987, to May 23, 1995. Also, she is well known for playing the various title character in Hallmark Channel's film.

Besides that, Bure worked as a co-host of the daytime TV talk show The View from 2015 to 2016. In 2014, she was a contestant on Dancing with the Stars season 18, where she placed seventh.

Who is Candace's Husband?

He is none other than, Valeri Bure, a Russian-American former ice hockey player. He has played 10 seasons in the NHL(National Hockey League) for Calgary Flames, St. Louis Blues, Florida Panthers, Dallas Stars, and Montreal Canadiens.

The 1.57 m tall Cameron met her future husband Valeri at a charity hockey game in 1994. They were first introduced by Candace's Full House co-star Dave Coulier. And then the lovebirds walked down the wedding aisle on June 22, 1996, in a hush-hush ceremony surrounded by their loved ones.

Now, they have celebrated their 24 years of marriage anniversary on June 22, 2020. Further, they oftently share family pictures on their respective social media accounts and also talks about their relationship in some interview.

Once, the Fuller House star said that there have been several tough years, in a row, ups and downs, bad attitudes and bad decisions. But they've continued and ridden them out. She continues saying that they loved each other through them.

She is a Mother Of Three Kids

At the current time, Candace, 44, and Valeri Vladimirovich, 46, are quite busy to raise their three teenage children. They gave birth to their first child, Natasha Bure in 1998. She completed in season 11 of The Voice when she was 18.

On January 22, 2002, they welcomed their middle born son Maksim Valerievich Bure and their youngest son Lev Valerievich Bure was born on 20 February 2000. Now, the couple makes time for their kids and try to never argue in front of them. Now, three of them are growing up so fast.

Yes, the 20-year-old Lev has been enjoying his love life with his girlfriend, Taylor Hutchison for nearly one year. She is an actress who is known for Little Wild West (2016).

On August 30 2020, Candace announced her son's engagement news by posting their big day photo while Lev getting down the knee. She wrote: "She said YES!!! Last night my son Lev proposed to his beautiful girlfriend".

And this mama/mama-in-love can’t wait for wedding planning, she added. Before Taylor, Lev has dated Duck Dynasty' star, Bella Robertson, 18, who is 2 years junior to him. Bella is the youngest daughter of Willie Robertson and Korie Robertson.

How Much is Candace Bure's Net Worth?

Candace Cameron Bure has a net worth of $14 million as of 2020. That is the combined net value with her 24 years of a husband, Valeri Bure, a retired hockey player. She has acquired her fortune throughout her career as an actress, author and reality TV star.

Cameron is famous for playing the role of D.J. Tanner on the sitcom Full House. So, she reportedly received $30,000 per episode. As an author, she has published three books named Reshaping It All: Motivation for Physical and Spiritual Fitness, Balancing It All: My Story of Juggling Priorities and Purpose and Dancing Through Life: Steps of Courage and Conviction.

On the other hand, her husband, Bure took home just over $22.5 million in salary during his career in NFL. Also, he bagged $3.1 million from Florida Panthers between 2003 to 2004.

The husband Valerie and wife Candace paid $1.377 million for a home in Plantation, Florida in September 2001. But they sold the property for $1.455 million in 2015 after Bure finishing game for the Florida Panthers.

That same time, the couple bought a beautiful home for $2.355 million in Malibu, California. Also, in 2012, they again bought a two-acre rural residence in St. Helena, California.

She was born on April 6, 1976, in Panorama City, Los Angeles, California. Her parents are Robert Cameron (father) and Barbara Cameron (mother). Further, she has two sisters Melissa Cameron, 45, Bridgette Cameron, and one brother Kirk Cameron.

Kirk, born on 12 October 1970 is an actor who is famous for Growing Pains. As per her citizenship, she is American and is of white ethnicity. So far, she studied at Nevada Avenue Elementary School and Chatsworth High School.