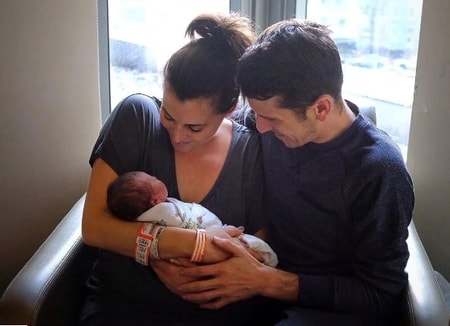 "We have some happy news to share from two members of our NBC News family". Today Show tweeted this caption announcing the birth of Hallie Jackson and Frank Thorp's first child.

The baby girl arrived in the life of NBC News correspondent. Monroe Jackson Thorp weighing 5 lbs., 9 oz., and 19-inches long were born to the couple before the expected time period.

Hallie's colleagues Hoda Kotb, Savannah Guthrie, Al Roker, and Craig Melvin announced the news on excitement on the Today Show. Monroe's supposed to be born not until early April but her unexpected arrival definitely brought happiness all around.

NBC News Chief White House Correspondent Hallie honored her great-great-great-grandfather by choosing the name Monroe for her daughter. In the statement after the delivery, Jackson says,

"While we were not expecting the child of two journalists to arrive three and a half weeks ahead of her deadline, Ro clearly saw no need to wait any longer".

"It just makes us all the more eager to see the world through her big, curious eyes".

It was in November 2019, when Hallie gave the big news about her pregnancy. Jackson's fans could feel her excitement while she announced her pregnancy via Willie Geist's Sunday Mail segment in Today.

Check out the video of Hallie Jackson revealing the news of Pregnancy!!!

Chief White House Correspondent Hallie, furthermore, thanked all the people who showed love and support during the birth of her daughter. On behalf of Frank as well, NBC correspondent gave a shoutout to Today Show and Willie for a memorable morning.

Not just Jackson, but her spouse Frank is also super-excited on the birth of his daughter. The producer at NBC News showed his excitement via a tweet. He wrote after the birth of Monroe, every day is an adventure and wants to show the little one the world.

Before sharing a loving life with Frank, Hallie was in a marital relationship with Dough Hitchner. Dough and Jackson got hitched in 2011 and share two daughters whose identity is kept under the radar.

Apart from all of that, the NBC News Correspondent is in a happy romantic affair with Thorp. Congratulation is flying to the couple from all over the world as they share a big responsibility to raise Monroe right.