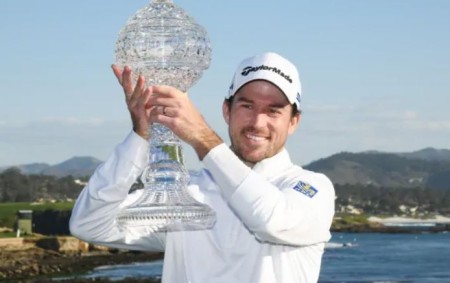 Nick Taylor is a Canadian professional golfer who has two PGA Tour wins as of January 2021. He became the first Canadian player to win the 2014 Sanderson Farms Championship in seven years. In February 2020, Nick won the AT&T Pebble Beach Pro-Am with a one-shot lead over Phil Mickelson.

Nick Taylor was born on April 14, 1988, in Winnipeg, Manitoba, Canada, to parents, Jay Taylor and Darlene Taylor. He has an older brother named, Josh Taylor who played golf at the University of Texas-El Paso. Nick graduated from the University of Washington in the United States.

The 32-year-old golfer, Nick Taylor has been married to his wife, Andie Taylor since May 11, 2014. The couple is high school sweethearts who began dating in 2008. They have been married for over six years as of 2021.

Nick and Andie welcomed their first child, a son named, Charlie Wells Taylor on October 24, 2019. They often post pictures of their adorable child on social media. Talking about Nick's wife, there is not much information.

As per Andie's Instagram account, she works as a part-time social worker. Previously, she was a full-time social worker at Abbotsford Regional Hospital in Canada. Besides raising her son, Andie never misses any chance to watch her husband's tournament.

On the occasion of Andie's 32nd birthday, her golfer husband shared a sweet message via Instagram. On the caption, he wrote: "We are so lucky to have you and share this life together. First birthday as a mom Happiest of birthdays to my favorite person!"

The 2009 Canada's Top Amateur Golfer, Nick Taylor has an estimated net worth of $4 million. He turned professional in late 2010 and some of his best results in major championships include the U.S. Open, PGA Championship, and Masters Tournament.

Taylor who is currently ranked #136 in the Official World Golf Rankings earns a decent income. Now, let's see how much he has collected for the past five years including the first season of 2021.

The exact details of Nick's earnings from his endorsements are unknown. However, his sponsors and partners are top brands including TaylorMade Golf Canada, RBC, Adidas Golf, Algra Bros, and Ledgeview Golf Club. Nick was seen promoting a light beer product called, Michelob ULTRA via Instagram.

Nick along with his social worker wife actively participates in community services and charities. They frequently coordinate with local centers and foundations. Through Nick Taylor Charity Pro-am, the golfer awards funds to deserving students and families.

In September 2019, Nick and Andie were able to raise over $225,000 for the UFV Cascades Athletics, Chilliwack Community Services, and 27Blue Foundation. Likewise, the couple has partnered with the University of the Fraser Valley. Through Nick and Andie Taylor Endowment Leadership Award, a deserving student-athlete gets a decent reward.