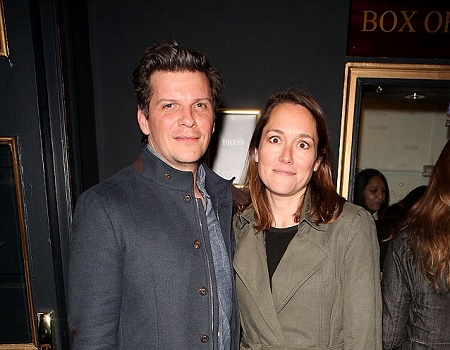 One of the famous British actors, Nigel Harman is happily married to his wife, Lucy Liemann, who is also a popular actress. Recently, the couple has completed their 9th years of togetherness. Further, Nigel and Lucy are proud parents of one child.

Do you know? Nigel Derek Harman is best known for playing heartthrob Dennis Rickman in the BBC soap opera EastEnders from 2003 to 2005. During his time on the show, EastEnders, Harman won multiple awards including National Television Awards 2003, Inside Soap Awards 2004, and 2005, among others.

Despite his busy career, he still manages to spend his free time with his family. Let's take a little sneak peek about his personal life.

How is Marital life going on with Lucy Liemann?

Coming to Nigel and Liebmann's conjual relationship, they are a blissfully married couple for nearly one decade. Until now, there have never been rumors coming out about their extramarital affairs and any form of divorce between them on the media.

The actor, Harman, who is 46 years old tied the knot with his long-term girlfriend turned wife, Lucy Liemann, 46,  in the year 2011 at a private ceremony. Their big day was held in the presence of their family members and friends.

Sadly, there is no further information about their first meeting on the media because of their secretive nature. Although the two are related to the same acting field, they share a very effective and powerful connection together.

Blessed with one Adorable Daughter

As we already mentioned that this beautiful couple are married for 9 long years. So, during the period of their union, Harman and Lucy gave birth to one baby girl in 2012 together.

But, the actor who played the role of Bradley Dawson in Sky One's Mount Pleasant has not revealed his 7 years old daughter's name to the public. In fact, he prefers a very low key life when it comes to revealing his intimate life.

In the same way, some other Hollywood celebrities, including Rachel Mackley, Noreen Jameel, are keeping low key parenting.

Tamzin Outhwaite is an Ex-Girlfriend of Nigel

Now talking about his past affair, the 1.78 m tall handsome hunk has been in a romantic relationship with Tamzin Outhwaite, now 49 years. She is an English actress who rises to the top after playing Mel Owen's role in the EastEnders soap opera of the BBC, where Nigel starred as well.

It seems, this former couple first met on the TV show, EastEnders in the early 2000s. But after being together for the past few years, they broke up officially in the year 2003.

Nigel's Wife is a TV and Film Star

Born on 24 November 1973, Lucy has made appearances in numerous series including The Bill, Agatha Christie's Poirot, Moving Wallpaper, and Reggie Perrin. She also played Lucy's role in the third part of the 2007 Jason Bourne film series, The Bourne Ultimatum.