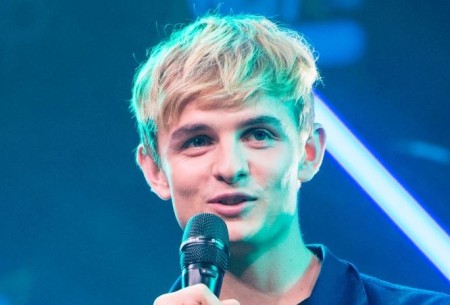 Otto Farrant is a British actor who is recognized for his performance in Amazon Prime's thriller series, Alex Rider. Likewise, he is known for his appearance in films such as Clash of the Titans, and Salmon Fishing in the Yemen. Further, his notable television works include The White Queen, War & Peace, and Mrs. Wilson.

Otto was born on April 17, 1997, in England, United Kingdom. He is 23 years old as of 2020. At an early age of 11, Farrant began acting in stage productions. Otto performed in stage plays at the National Theatre and Shakespeare's Globe theatre. Let's know some interesting facts about this rising star.

Till now, Farrant hasn't shared a single piece of information about his relationship status. In his early 20s, this British actor is probably focused on expanding his career. Therefore, he is possibly single, and also he doesn't have a girlfriend as of now.

When it comes to his personal life, Farrant is extremely secretive. He may have been in a few romantic relationships before, but there is no reliable evidence. Additionally, The White Queen actor is not involved in any sort of rumors and controversies.

Farrant is not active on social media, and hence it is difficult to track down his daily updates. Well, who knows he might be searching for a perfect partner.

How much is Otto Farrant's Net Worth?

The popular British actor, Otto Farrant, has a net worth of $3 million as per celebritynetworth. Another actor Robert Glenister also has a similar net worth.

Since 2010, Farrant has been active in the entertainment industry and has amassed a decent fortune through his acting career. While some actors' salaries range between $45,000-$53,000, Farrant might earn over $37,000 per episode.

To date, Otto has appeared in a few successful movies which has collected an excellent revenue at the Box-Office. For example, the 2010 film, Clash of the Titans in which he played young Perseus made $493.2 million. Likewise, the 2011 comedy-drama Salmon Fishing in the Yemen collected $34.6 million at the Box-Office.

Having a theatrical background, Farrant seamlessly portrays his every character. Most of the critics and fans give a positive response to Otto's performance. Between 2010 and 2018, Farrant appeared in television series such as The Bill, The White Queen, Silk, War & Peace.

In 2019, Otto bagged a leading role in Amazon Prime Video's thriller web series Alex Rider. The show is a television adaptation of a novel series where Farrant appears alongside Vicky McClure and Stephen Dillane.