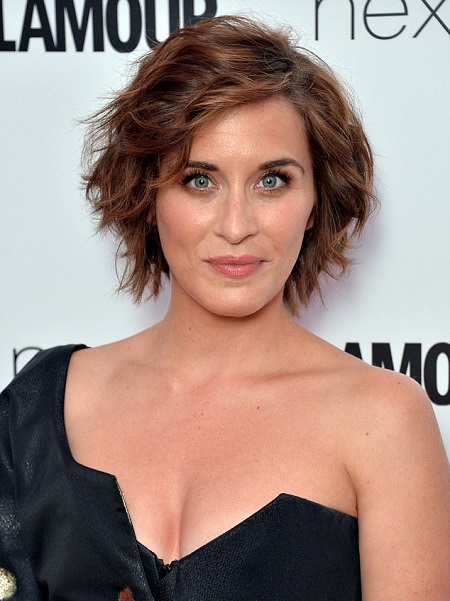 Vicky McClure is a British actress, model, and presenter who is widely known for her role as Detective Inspector Kate Fleming in the BBC series Line of Duty from 2012 to present. Also, she is famous for her roles as Lorraine "Lol" Jenkins in films  This Is England (2006), This is England '86 (2010), and This Is England '90 (2015).

Victoria Lee McClure was born on May 8, 1983, in Wollaton, Nottingham, United Kingdom. Her mother used to work as a hairdresser while her father was a joiner. Further, she is the younger sister of Jenny. So far, she studied at the Fernwood School. Later, she joined Italia Conti Academy of Theatre Arts Ltd and Central Junior Television Workshop to pursue her acting career. As per her citizenship, she is British and is of white ethnicity.

Yes, the 37 years old Actress Vicky is officially off the market. She is happily engaged to her boyfriend turned fiance, Jonny Owen. He is a Welsh actor, producer, and author who is known for appearing in TV series, My Family, Shameless, and Murphy's Law.

McClure announced her engagement news through her Instagram page on Thursday, December 28, 2017, with the caption: 'YESSSSSSSSS!!!!'. In the post, she flaunted her massive engagement ring by posting the photo of her herself, and her beau Owen.

The pair who are dating since 2012 actually got engaged over a cup of tea on Christmas Day in Nottingham on Monday, 25 December. But they waited until Thursday to announce their big news to the fans. And its' been already more than two years that they become engaged.

'We stayed at home for the first time together on Christmas Eve so had Christmas morning together", the BAFTA-winning said the Nottingham Post. She continues saying that Jonny popped the question over a cup of tea and then they moved onto the bubbles by 8.3: 0 am.'

The 1.63 m tall TV star met her partner Jonny on the set of his movie Svengali in 2012. " She was funnier, more entertaining, and sexier. I went home to Wales and dreamt about her playing Michelle in Svengali",  the filmmaker Johny said. It means before exchanging their rings, they have dated almost for about five years.

Now, the two reside in Nottingham.

Her Husband To Be, Johny Is A Divorced Man

Yes, Victoria's partner Welsh director Jonny was once a married man. He tied the wedding knot with his first wife, Eleanor Braines.

But the information regarding their marital life is still away from the limelight. But it is believed that they shared a married life until Owen started dating Vicky. Moreover, he has one daughter named Katie Owen who works as a DJ. Recently she signed to Coalition Agency with fellow DJs and radio hosts Nick Grimshaw, Greg James, Sara Cox, and Jo Whiley.

The English actress, Vicky McClure has an estimated net worth of $1 Million as of 2020. She credits most of her earnings to her successful career as an actress, presenter, and model.

Similarly, her salary might fall between $25000 to $48000 annually as an actress for her performances. Likewise, her portrayed film Hummingbird which is released as Redemption in the United States has grossed $12.6 million. Her career credits are Filth and Wisdom (2008), Svengali (2013), and The Replacement (2017).

For further updates on English Artists, stay tuned to Marriedceleb!!!