Home married Ozzy Osbourne is in Long-lasting Love with Sharon Osbourne after his Divorce with Thelma Riley!

Ozzy Osbourne is in Long-lasting Love with Sharon Osbourne after his Divorce with Thelma Riley! 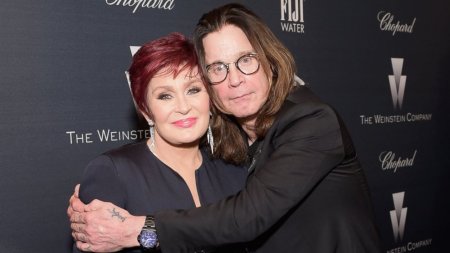 Ozzy Osbourne is one of the leading heavy metal singers, who came to attention with his distinctive singing voice and occult themes in his lyrical songs. From his collaboration with the Black Sabbath band, he became a global icon and enrolled in the Hollywood Walk of Fame as well as in the UK Music Hall of Fame.

Birmingham-based singer, Osbourne made his fans mesmerized with his tea-shade sunglasses and long dark hair. Many of his fans were fond of his black clothing and slurred, mumbling voice. In this article though, we're going to focus on how his married life is going? To know read along.

Prince of Darkness, Ozzy and his wife, Sharon Osbourne (then Sharon Levy) met for the first time while he was collaborating with the Black Sabbath band in the late-1970s. At that time, Sharon was a junior assistant for her father, Don Arden, who was working as a manager for the band.

When the Black Sabbath's lead vocalist, Ozzy left the band, Sharon became his manager and helped him to pursue as a solo artist in 1979. The duo then started dating and became engaged after Ozzy proposed surprisingly.

The couple then walked down the aisle in an intimate ceremony on 4th July 1982 in Maui, Hawaii. At their wedding ceremony, Sharon wore a white while tulle applique off-the-shoulder ball gown with long sleeves. Similarly, Ozzy was donned in a slim white suit, tied up with a white bow tie.

After ringing the wedding bells, the couple is living a blissful life. Back in 2019, they completed their 37th wedding anniversary on the 4th of July. They also attended the 2020 Grammy Awards ceremony on 26th January 2020.

Multi-platinum singer, Ozzy and his wife, Sharon are happy to share three children in their marital life. The two first welcomed a baby girl, Aimee Osbourne on 2nd September 1983.

Sharon then gave birth to their second daughter, Kelly Osbourne on 27th October 1984 and a lovely son, Jack Osbourne (born on 8th November 1985).

Three of their children are following their passion for the arts of acting as well as in the music. More to that, they frequently appear on their father, Ozzy's reality TV show, The Osbournes on MTV since the early 2000s.

Do You Know About Ozzy's First Marriage with Thelma Riley?

Rock and Roll Hall of Fame star, Ozzy was previously committed to his first wife, Thelma Riley. The two had their first encounter at a nightclub, the Rum Runner in Birmingham, where Thelma was a waitress in 1971.

After spending quality for a moment, the duo began dating, and shortly they became engaged when Osbourne proposed her. The couple then exchanged their wedding vows in an intimate ceremony in July 1971.

The couple, however, ended their marital union because of Ozzy's drug and alcohol abuse and filed for divorce in 1982. They then finalized their divorce in the same year with settling down the spousal and child support for Thelma and their two children.

If You're Fond Of Exploring The Amusing Facts About Celebrities' Intimate Details & Career Highlights, Then Visit Married Celeb!!!