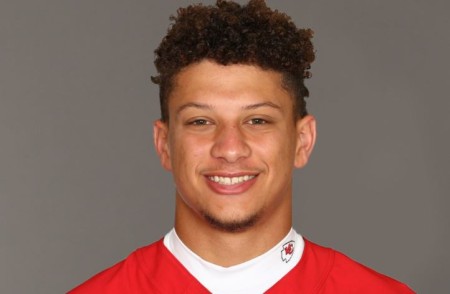 The second youngest quarterback to win the Super Bowl, Patrick Mahomes plays for the Kansas City Chiefs of the National Football League (NFL). At the 2017 NFL Draft, he was the tenth selection by the Chiefs. Also, Mahomes is the second African-American to win the Super Bowl Most Valuable Player.

Patrick initially played college football and baseball at Texas Tech University. Later, he quit baseball and focused on his football career. Patrick's record-breaking deal with Kansas is the biggest contract in the history of North American and professional sports. Besides, he also has a joyful personal life. Without any delay, let's jump right into his achievements.

Patrick Mahomes is an Engaged Man!

The 25-year-old, Patrick Mahomes is engaged to his longtime girlfriend, Brittany Matthews. On September 1, 2020, the quarterback proposed his high-school sweetheart at Arrowhead Stadium. Mahomes gave Brittany a beautiful engagement ring with a emerald cut diamond and two-diamond-embedded bands.

On September 30, 2020, the newly engaged pair announced via social media that they are expecting a baby. Brittany shared a picture where she and Mahomes are holding a sonogram. Further, she wrote in the caption: "Mom & Dad, taking a small detour to the wedding."

Mahomes is yet to announce the date of their wedding, but it seems they will soon become husband and wife. The pair lives in their $1.925 million house in Kansas City. They have two pet dogs named Steel and Silver.

Mahomes and Matthews began dating since their tenth grade at Whitehouse High School in Texas. After high school, they continued their long-distance relationship. Matthews also played college soccer at the University of Texas. Later she played professional soccer for a team in Iceland called UMF Afturelding.

Meanwhile, Brittany moved to Kansas City to be with Mahomes by October 2017. She currently works as a certified fitness trainer and entrepreneur. In 2019, Matthews launched a website called, "BrittanyLyneFitness" through which she offers fitness programs and merchandise.

Record-Breaking Half a Billion Dollar Contract

On July 6, 2020, Patrick Mahomes signed a ten-year deal worth $503 million with the Kansas City Chiefs with guaranteed $477 million. The contract includes $26 million in potential bonuses. As per analysts and records, Mahomes is the first player to bagged half-billion-dollar deal in sports history. Having said that, his current net worth is $30 million.

Mahomes' agency, Steinberg Sports, tweeted a congratulatory message. His extension includes a $140 million injury guarantee along with no-trade clause. According to Mahomes' contract, he will receive small base salaries. As long as he is on the Chief's roster, Patrick will be earning a huge sum of money.

Over the years, Patrick has proved to be one of the most prolific athletes in sports. Patrick won the 2018 MVP, and in the 2019 season, he won the Super Bowl MVP. Therefore, it is a fair trade for a player having such an impressive stature. Some of the other highest earning NFL players are Drew Brees, Tom Brady, Russell Wilson, etc.

Salary Over the Years

Now being one of the top players also brings a lot of endorsements deals and campaigns. Likewise, Patrick has several endorsement deals on his name. His first deal was with Hunt, a brand of preserved tomato products.

Patrick is the fist Cheif's player to appear on the cover for Madden NFL 20. Besides, he is the founder of a nonprofit organization called, 15 and the Mahomies Foundation. Patrick, along with several other NFL players, made a video encouraging the NFL to speak against police brutality.

Following George Floyd's brutal killing by the police, many people and organizations protested regarding violence against black people in the U.S.

Having a huge wealth certainly brings you the privilege of owning luxury possessions. And certainly, Patrick knows how to spend his millions. Besides investments, he owns several super-cars and houses.

Watch Patrick and Brittany giving a tour of their Kansas City House!

Patrick owns a Ferrari 812 Superfast whose cost is $338,000. The new model is said to be the best in the current Ferrari lineup. Additionally, Mahomes has a Genesis G70 Luxury Sedan which he won as the prize after winning his first-ever Pro Bowl MVP.

In July 2019, Patrick and his then-girlfriend, Brittany bought a $1.925 million house in Kansas City. The 3,759 sqft house includes three bedrooms, three bathrooms, a home gym, and a pool.

Parents: Father was a MLB Player

Patrick may have got the athletic genes and abilities from his father, who wa a renowned baseball pitcher. Patrick Mahomes Sr. played in Major League Baseball from 1992-2003.

Patrick Sr. and his wife Randi Mahomes married in the late '90s. The couple welcomed Patrick Mahomes II on September 17, 1995, in Tyler, Texas. It is not known when they separated. Additionally, Patrick has two siblings named Jackson Mahomes and Mia Randall.