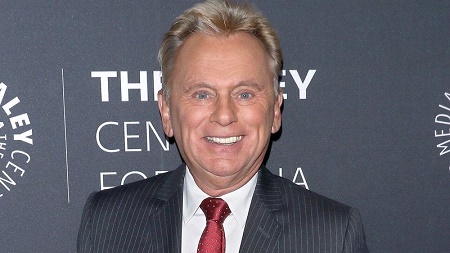 Do you enjoy watching a game show then you've probably watched Wheel of Fortune? Well, the famous television game show is hosted by American TV personality Pat Sajak. He is also a former weatherman, known for his work as a WSM-TV news reporter.

Patrick Leonard Sajdak was born on October 26, 1946, in Chicago to the Joyce Helen and Leonard Anthony Sajdak. After his dad Leonard's death, his mother remarried to Walter Backal. For his education, he is a graduate of Farragut High School 1964) and also attended the Columbia College Chicago.

Meanwhile, Sajak has been married for more than three decades with his long term partner, Lesly Brown Sajak. She works as a professional photographer.

The two started dating in 1989 after two years of Pat's divorce with his first wife Sherrill. The TV host Patrick, 73, and Brown, 55, got hitched on December 31, 1989, in the presence of dozens of guest. Today, they have completed their 30th years of togetherness.

More joyfully, from their union, Pat and Lesly share two adorable, teenage-age children. After a year of marriage, they first welcomed their son Patrick Michael James Sajak on born September 22, 1990.

And their youngest daughter or child Maggie Marie Sajak was born on January 5, 1995. Now, Maggie is a known as country music singer who has released a few songs like First Kiss, Wild Boy, Live Out Loud.

Now, the Emmy Award-winning TV personality lives a happy life in Severna Park, Maryland with a second house in Los Angeles, California along with his kids and wife.

His First or Ex-Wife is Sherrill Sajak

Yes, Sherrill Sajak is known as the first wife of Pat. They began dating in 1978 and have taken their relationship seriously after a year of romance. And they got married in 1979 in the presence of family, relatives, and friends.

Unfortunately, due to certain personal problems, their nuptial relationship did not last long. So, Patrick Leonard and Sherrill decided not to continue their matrimony and had a divorce in 1986 after nearly eight years of togetherness.

But the reason behind their seperation is still private. Neither Pat nor Sherrill have talked to media about it. Nevertheless, the two shared no offspring together.

What is Pat Sajak's Total Net Worth?

Well, Pat is regarded as one of the richest game TV show hosts all the time. As of early June 2020, he has amassed the net worth of $70 Million. He has earned his heavy fortune throughout his professional work as a TV host, a former weatherman, and a TV personality.

Throughout his career, Sajak got a huge reputation as the host of the TV shows, Wheel of Fortune. Thus, he reportdely makes an annual salary of $15 million or $312,500 per workday from the show. Whereas his co-host, Vanna White's annual wage is roughly $10 million. Further, Pat receives $52,083 per show while Vanna gets $34,722.

As of now, the 1.77 m tall TV host seems to be a healthy man. But once the Wheel of Fortune star underwent intestinal surgery on November 7, 2019. He removed his blockage. Whilst Sajak recovered, the show was hosted by his co-host Vanna White.

After a month, he announced that he was back on the show via Twitter. In an interview with Good Morning America, he also said that he has no expected to leave from the show despite health fears.

Stay Updated With Us: MarriedCeleb To Know More About Hosts