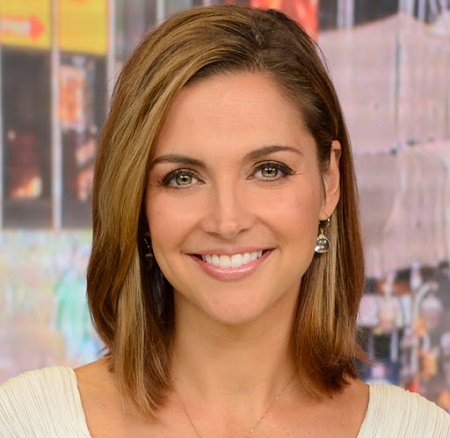 Paula Faris is an American journalist and television correspondent who is now working for ABC News as a senior national correspondent. But, she gained fame when she served for Good Morning American as a co-anchor from 2014–2018 and The View as a co-host from 2015–2018. Before that, she co-anchored the news programs America This Morning and World News Now.

She was born on October 26, 1975, in Jackson, Michigan, the United States to the Edward and Carol Faris. She has three siblings. So far, she holds American citizenship and is of white ethnicity. For her education, she studied at the Jackson Christian School and graduated from Cedarville University with a degree in broadcasting in 1997.

As of now, Faris has been sparkling her marital relationship with her husband, John Krueger. He is an American regional manager for real estate firm Marcus & Millichap for Westchester, New York, and Manhattan.

The couple first met while attending Cedarville University in Cedarville, Ohio. Paula graduated in 1997 while John graduated two years later in 1999. Following their graduation, the high school sweethearts tied the wedding knot in the year 2000 among their loved ones.

Since the day, the duo leads a healthy and beautiful married life for about 20 years. In fact, Central State University's master's degree holder Krueger has encouraged her through every step of her career. “God has blessed me with a patient husband, supportive friends, and unconditional love from my family", she told sources.

Faris and Krueger, aged 44, who are both Christians frequently attend the Hillsong Church in New York City with their kids. Now, the entire family resides in Westchester County, just outside of New York City.

Together, Faris and her spouse, Krueger have three children who are all under the age of 15. At first, they gave birth to their eldest daughter Caroline Grace Krueger, in 2007.

Two years later, they again welcomed another bundle of joy or firstborn son JJ Krueger in 2009. Their youngest one son Landon Krueger was welcomed on January 7, 2014. But sadly, the co-anchor of Good Morning America Weekend had suffered three miscarriages after having three good pregnancies.

In January 2020, she said in the interview with Sean Spicer in 2017 that she went through a pregnancy loss after experiencing two earlier. She always wanted four babies. She also added thanked her co-host, Meghan McCain for being an incredible source of support.

How Much Net Worth Does Paula Faris Have?

Paula Faris is an American journalist and television correspondent who has an estimated net worth of $2 Million as of 2020. She credits her whole fortune to her professional anchoring and reporting career.

Since September 2018, Faris is associated with ABC News as a senior national correspondent. So she might be paid off in the range from $43,000 to $80,243, which is the average salary for a senior correspondent in the United States. She works on the podcast, named “Journeys of Faith with Paula Faris”, launched on November 14 by the ABC network.

Furthermore, she made appearances on Good Morning America Weekend as a co-anchor after departing of Bianna Golodryga, from August 9, 2014, to July 18, 2018. Also, she worked for The View as a co-host for season 19 to season 22, alongside Sunny Hostin, Whoopi Goldberg, and Joy Behar.

Asides this, she has published a book named Called Out: Why I Traded Two Dream Jobs for a Life of True Calling, on April 21, 2020.