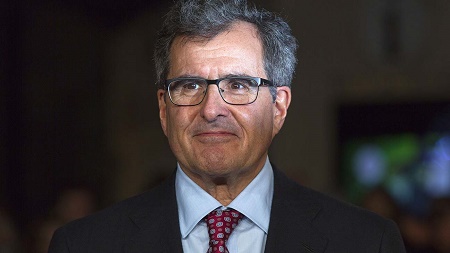 Peter Chernin is a renowned American entertainment and media executive who has a long history of working in the media industry. He is also the founder and CEO of The Chernin Group (TCG) which invests, manages, and runs media, entertainment, and technology businesses.

Chernin was born on May 29, 1951, in Harrison, New York, to the parents of Mary and Herbert Chernin. Moreover, he earned a B.A. from the University of California, Berkeley in English literature.  So far, he holds American citizenship and is of mixed ethnicity.

The couple Peter and Megan, who are in their early 60 now share a strong and healthy conjugal relationship for more nearly four decades. Partner, Megan who graduated from Manhattanville College a B.A in English serves as Co-Chair of the LA Promise Fund Board of Directors.

Likewise, they pronounced as a wife and husband in the presence of their family and friends in the year 1980. Since the day, the couple still leads romantic married life with no sign of divorce or separation.

A American businessman, Peter shares three children with his life partner. On 1 April 1983, they gave birth to their first-born or older son John Chernin. Now, John, 36 works as Producer and Writer who is known for his appearances in Stuck on You, starring Frankie Muniz.

Also, Peter and Megan are parenting their two children Margaret Chernin (born in 1987) and Dave Chernin. Currently, a daughter is seen working as co-producer of the movies and some series like The Loudest Voice, The Goldfinch and Ben in Black.

As of early 2020, Peter Chernin's net worth is reportedly around $400 million. Likewise, he assembles most of his income from his strong profession as a TV and film producer, Investor, Businessman, and Industrialist.

As a Chairman and CEO

In 2010 Peter established his own company called The Chernin Group. The company focuses on three areas: investing in US technology and media companies, developing premium content for film and television and capitalizing on emerging market strategic business opportunities.

David Portnoy announced on January 7, 2016, that Chernin Media is buying a majority stake in the famous Barstool Sports website.

Chernin has donated over $100,000 to the Democratic Party, candidates & related groups, including hosted Barack Obama for a 2013 fundraiser. He supported Hillary Clinton in the run-up to the US presidential election in 2016.

News Corporation's president and the chief executive officer now lives in the city of Santa Monica, California. The average price of the house is estimated at about $1,720,300 according to some online tabloids.