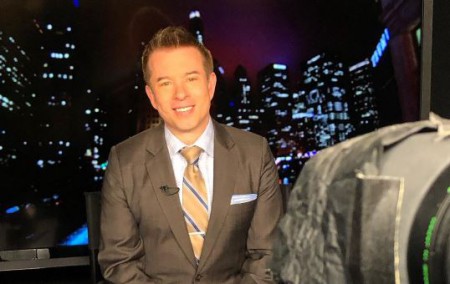 There are a lot of celebrity journalists who become famous for their unique screen presence and personality. They provide daily updates on the national and international matter. Although the job of news anchor comes might seem a bit of tiresome work, most of the anchors lives a lavish lifestyle. And today we are going to talk about Rafer Weigel, an Emmy award-winning news anchor, and reporter at Fox 32 WFLD-TV. He has a similar career trajectory like an American radio host, TV anchor and a media personality Larry Mendte.

Who is Rafer Weigel?

Rafer Weigel was born on May 5, 1969, in New Haven, Connecticut, United States. As of 2019, he is 50 years old, and his birth sign is Taurus. His father was Tim Weigel, Chicago television sportscaster and newspaper columnist. While his mother, Kathy Worthington is a former WGN Radio news anchor.

Weigel has two sisters Jennifer and Teddi. Talking about his education, Weigel graduated from Evanston Township High School in 1987. Likewise, in 1992, he graduated with a degree in theatre in 1992 from the University of Illinois at Urbana–Champaign.

Talking about Rafer Weigel's personal life, he is currently in a relationship with Kathy Browne an international flight attendant, actress and author of 'My Emerald City: When Growing Up Grunge Is a Killer.'

The couple got engaged in August 2018 and were planning to tie the knot in March 2019. However, there is no additional information about the wedding ceremony. For your information, Weigel has been married previously.

Rafer Weigel was previously married to photographer Tiffany Weigel. The couple married in 2002 and welcomed their first child a son named Heathcliff John Weigel on November 20, 2009.

Sadly Rafer and his ex-wife, Tiffany separated after more than one and half decades-long marital relationship. The reason for their partition is unknown.

After separating from his first spouse, Rafer began dating Kathy Browne, and they are already engaged as of 2019. The details of their marriage are still behind the curtain. He shares lovely pictures of his son and fiance. It seems that Kathy also has a son from her previous relationship.

As of 2019, Rafer Weigel has a net worth of $1.5 million. As a reporter, anchor, and actor, Rafer Weigel has managed to amass an impressive fortune. He has worked as a sports anchor for the nation's popular television stations such as CNN, WLS-TV, and FOX.

Besides, he is also involved in volunteer activities. He is a member of the Advisory Board for the All-Stars Project since 2012.

How much is Rafer Weigel's Salary?

Before discussing Weigel's salary, let's know an interesting fact. Do you know, the evening news anchor's pay is generally higher than that of morning news reporter? Hence, Rafer as a weekend 9 pm news anchor earns an annual salary of over $76,000. For your information Levan Reid, a former weekend sports anchor also has similar yearly earnings.