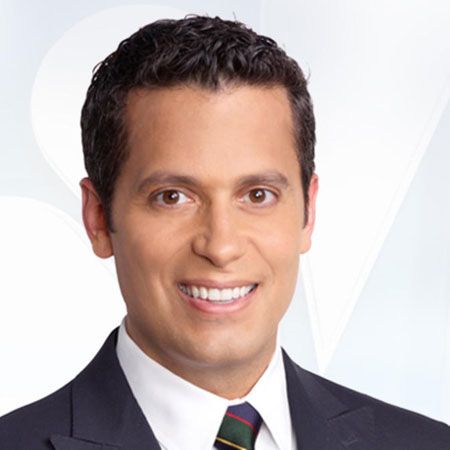 Two-time Emmy award-winning American meteorologist, Raphael Miranda is now affiliated at WNBC television as a weather producer in New York City, New York. Well, he has been serving at the local morning news and entertainment TV program, Weekend Today in New York, on WNBC since 2009.

He was born on April 26, 1977, in Bedford Hills, New York, the United States to the Brazilian father and American mother. So, he holds American citizenship and is of Hispanic ethnicity. He completes his graduation from New York University with a Bachelor of Arts degree in Spanish. Later he got a Bachelor of Science degree from Brooklyn College in broadcast journalism.

Who is Raphael Miranda Married?

Raphael, who received a geosciences/meteorology degree from Mississippi State University is a happily married man. A member of the American Meteorological Society, Miranda tied the knot to his love of life or his long term partner, Doug Simpson.

The Gay Journalist Miranda and his husband, Doug tied the wedding knot on December 3, 2003, in a private ceremony. Currently, the couple is enjoying their married life for over 16 years with no sign of divorce.

The NBC New York meteorologist and his partner, Simpson became parents when their long term friend or surrogate mother, Sarah gave birth to their first child named Mac on Nov. 2016. Affter a welcoming son, Miranda said that he was thrilled about the news.

Net Worth and Earnings of Raphael Miranda

With a successful career as a meteorologist, Raphael has managed to earn quite a fortune for himself. As of early 2020, he has an estimated net worth of more than $1 Million, which is alike to Vivian Brown. He has accumulated most of his fortune throughout his successful journalism career as a reporter and meteorologist.

Well, Raphael initially started his career starting serving as a weather intern at NBC 4 New York channel in 2007. During WNBC, he has forecasted many extreme weather conditions like Halloween snowstorm in 2011, New York City's surpassing the previous February snow total record in 2010, and as well as the Blizzard of 2016.

Similarly, he also served in MegaPhone Interactive Trivia as a host from 2015 until the traffic reporter, Kaitlin Monte left the show for WPIX. In 2009, he joined the television program airing on WNBC, Weekend Today in New York after his departure from SallyAnn Mosey in 2008.