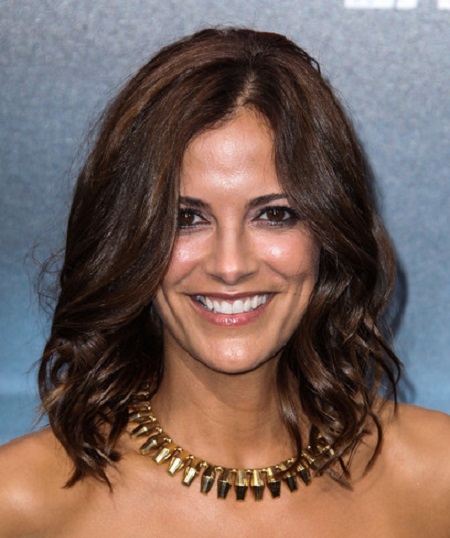 Six times Daytime Emmy Award-winning American actress and TV presenter, Rebecca Budig came to limelight after her performances on the CBS soap opera Guiding Light as Michelle Bauer from 1995 to 1998. More to that, she gained later worldwide popularity after starring as Greenlee Smythe on the ABC soap opera All My Children from 1998 to 2005 and from 2008 to 2011. Also, she was cast on General Hospital in the role of Hayden Barnes in 2015.

Budig was born on June 26, 1973, in Cincinnati, Ohio, the United States as Rebecca Jo Budig. She is the youngest of eight children of George Budig, a businessman, and Mary Jo, a homemaker. He has five older sisters and two brothers. She is a graduate of Cincinnati Public Schools School in Creative and Performing Arts (SCPA. Also later she studied at Miami University in Ohio in the major subject zoology.

Rebecca Jo, aged, 47, got married for the third time with her fiance, Michael Benson after dating for one year. He is a former ABC marketing executive.

They exchanged wedding vows in the year 2012 in a very private ceremony following their two years of engagement. Before saying Yes I Do, the pair became an engaged on Christmas Day on December 25 2010.

Benson proposed his girlfriend, Rebecca with a 1935 vintage ruby and diamond ring from Platt Boutique Jewelry. Two years out of their wedlock, the couple revealed that she had five-month pregnant with their first baby, on May 1, 2014.

On September 8, 2014, Budig and her spouse, Michael officially become parents when they gave birth together to their daughter Charlotte Jo Benson. She was 41. “Welcome to the world, Charlotte Jo Benson,” the proud dad Benson wrote on his Instagram post by sharing the photo of his actress wife and their new baby girl.

Her First and Second Marriage Details

Previously, the General Hospital' star, was married twice before Michael. His first matrimony was with Dr. Daniel Geller, whom she wedded in 2000. But their split after several months.

Then she went to marry a Bachelor star Bob Guiney, aged 49. After the first meeting on the show, The Bachelor on ABC Family, the couple tied the knot in July 2003 at his own apartment in Long Lake, Michigan. But after being together for seven years, they announced their separation on January 13, 2010.

Rebecca filed a divorce petition in April 2010 and their divorce was finalized on July 23, 2010, without requesting spousal support or any other financial support. Similarly, in the final season of The Bachelor, Bob chose Estella Gardinier, but they split soon after the show aired.

Since her beginning career in 1993, Rebecca is earning a huge amount of money within herself. Meanwhile, her exact amount of net worth has not been disclosed by anywhere but some sources reported it is around $2 Million. She has amassed her worth as a working of a television presenter and actress.

Budig has reportedly paid about $57,000 in a year from the CBS soap opera show, Guiding Light. Similarly, Rachel Miner is another Guiding Light star with a net value of $3 Million. Apart from the show, she has also acted in various TV series such as All My Children, Hope & Faith, CSI: Crime Scene Investigation, Blue Bloods, General Hospital, etc.

On the other hand, her first appearance on film was with Joel Schumacher's superhero movie Batman Forever, released on June 16, 1995. And the film has successfully earned $336 million worldwide against the budget of $100 million and became the 6th highest-grossing film worldwide of the year.

Asides acting, Rebecca has presented various TV programs such as Better, The Sports Illustrated for Kids Show, and Sunday Night Heat. In 2010, she won the first and only season of the ABC show Skating with the Stars, that aired from November 22 to December 21, 2010.

To Read more Biographies and Gossips on Celebrity Wives, stay tuned to Marriedceleb!!