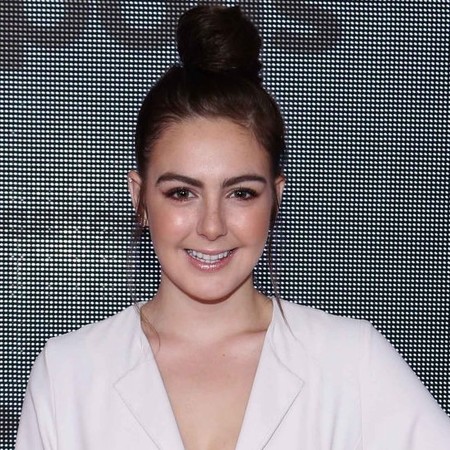 Regina Pavon is a Mexican actress and model. Moreover, Pavon gained international fame by playing the role of Zoe Solares in Netflix's Mexican thriller drama series, Dark Desire(Oscuro Deseo) which aired on July 15, 2020. Furthermore, she is also famous for her role in the movie No Manches Frida(2016) and No Manches Frida 2(2019). Apart, she has amassed a massive fan following on her Instagram account.

Netflix's Dark Desire Actress, Regina Pavon was born on November 13, 1998, in Mexico. However, her parents', siblings', and educational qualification details are still missing right now. Moreover, she holds a Mexican nationality and belongs to white ethnicity.

Well, Regina, 21, is in a romantic relationship with her boyfriend. Moreover, she is dating the guy name, Benny Emmanuel. Benny is also a Mexican actor. But, we don't have information when did they meet or start to date each other yet. Besides, the love birds are enjoying their precious time together and also share a strong bond between them.

So far, there is no news of their separation and split up yet. Apart, Regina spends her free time with her friends and family by going on vacation and doing adventurous activities. Nevertheless, Pavon is a model and loves to travels to a new place for her works. As of now, she is just enjoying her single life with her family.

The five feet and six inches(1.68 m) tall, Regina has collected a decent amount of money from her career as an actress and model. Yet, her actual net worth is unknown. However, Pavon's estimated net worth might be around $300,000 which similar to Quintessa Swindell.

On the other hand, the average salary of an actress/actor ranges from $50,000 per year. Besides, she also worked as a model so, she might earn an average salary of $54,000. Apart, she also presents on Instagram @reginapavon with the following of 447K followers. With such a decent amount of money, she is living a healthy and wealthy life with her family and boyfriend in Mexico.

Putting the highlights on a professional career, Regina started her career in 2013. However, she rose to fame after portraying the role of Monica in the movie No Manches Frida(2016) and No Manches Frida 2(2019). Apart, she also appeared in the television shows like The Two Lives of Estela Carrillo, Gossip Girl: Acapulco, and The Return.

On the other hand, she was also featured in Mexican comedy-drama Monarca in 2019 as the role of Lourdes Carranza for 10 episodes. Moreover, Pavon gained international fame by playing the role of Zoe Solares in Netflix's Mexican thriller drama series, Dark Desire(Oscuro Deseo) which aired on July 15, 2020. It includes stars like Maite Perroni, Paulina Matos, Jorge Poza, María Fernanda Yepes, and Erik Hayser.