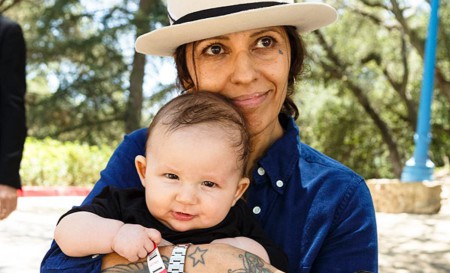 Rhodes Emilio Gilbert Perry is the son of Sara Gilbert, an actress and Linda Perry, a singer-songwriter. His parents are one of the most promising personalities in the entertainment industry who've won numerous accolades and became the inspiration for many young artists.

Sara is currently appearing on the television sitcom, The Conners and Perry recently earned a nomination for Grammy Award for the non-classical.

Rhodes was born on 28th February 2015, in the United States of America. Born into a Jewish family, he hails from mixed ethnicity (Brazilian, and Portuguese-American). He has three cousins, including Michael Boxleitner and Dakota Brinkman. Take a glimpse of Perry's personal life in the following sections.

The 4-year-old Emilio's parents are committed to a delightful marital relationship for decades. The couple walks down the aisle on 30th March 2014 at the One Gun Ranch located in Malibu, California.

The perfect soulmates have ten years of the age gap but still carries a beautiful bond. At the time of their wedding, Linda was 49, and Sara was 39 years old. During their nuptials, most of their friends and family relatives gave blessings for a new and happy life.

The couple had their first encounter in November 2011 and shortly started dating. Before the duo revealed their relationship publicly, they went onto various charitable works and guest-starred on popular TV shows where they gave hints to their fans about their affair.

After dating for two years, Sara surprisingly proposed her for marriage in April 2013. With so much happiness on the face, Linda accepted the proposal and became soulmates for life.

Rhodes' parent, Gilbert was first involved in a romantic relationship with The Big Bang Theory actor Johnny Galecki. The duo met for the first time on the set of Roseanne in 1992.

While dating Galecki, Sara realized that she is a lesbian and later decided to tell him. The duo then ended their relationship, but they chose to be close friends even after their separation.

After the split up, Sara began to date an American television producer, Allison Adler, in 2001. During their relationship, they welcomed two children, Levi Hank (born in October 2004) and Sawyer Jane (born on 2nd August 2007).

In July 2010, Sara was ready to launch a talk-show, The Talk, and after she started her show, she disclosed her sexuality. Later, she announced that she and Allison aren't together anymore but remains close friends.

On the other hand, Perry also dated The L Word actress, Clementine Ford. The two started dating in 2009, but a year later called-off their relationship due to some misunderstandings.

Rhodes' guardian, Gilbert has an impressive net worth of $35 Million as of 2019. Similarly, she makes a lucrative income from her profession. As of now, the average salary of an actor/actress in the United States is $56,502.

Check out Sara Gilbert and Linda Perry talking about their son, Rhodes, and album, Lullabies

Likewise, Perry's mother, Linda maintains a whopping net worth of $18 Million and collects a fruitful wealth throughout her works. She earned $20,800 from the first-week record sales of her album, Places along with Lea Michele, selling around 16 thousand copies.

Lives in a Lavish Home

Rhodes is enjoying a life of a rich kid in his parents' luxurious accommodation in Historic Hancock Park, located in Los Angeles, California. His parents owned the house at $6,850,000 in February 2016.

Perry's home features six bedrooms, six and a half bathrooms on 6,127 square feet. It also consists of a big dining hall with traditional comfort, a kitchen with furnished ceilings, a full-view terrace from the northern side of the residence.