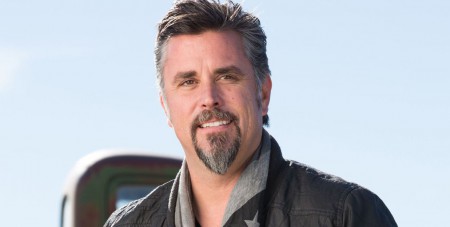 American entrepreneur, Richard Rawlings is one of the reputed business personality known for his appearance in the reality TV show, Fast N' Loud. More to that, he recently appeared in the Reality-TV series, A Very Brady Renovation.

Rawlings was born as Richard Ray Rawlings on 30th March 1969, in Fort Worth, Texas. Further, he is an American by his nationality and belongs to white ethnicity/race. Other than that, he is an engaged man. Take a look at Rawlings' personal life in the below.

The American TV personality, Richard, is in a happy relationship with a social media personality, Katerina Deason, who has 38,400 followers on Instagram. The couple first kept their love affair secret, but later they came out as lovers on 29th June 2019, while shooting the episode of Fast N' Loud in Deep Ellum, Dallas.

After dating for a few months, Richard surprisingly proposed Katerina for marriage on the terrace of Hotel Be Tulum in Tulum, Mexico, on 17th August 2019. Deason further accepted the proposal saying "Yes" to Richard.

Recently, on 7th November 2019, Richard posted a picture, celebrating Katerina's birthday on his Instagram. The couple revealed they are soon going to tie the knot.

The prolific entrepreneur, Rawlings, was married twice. He first tied the knot with Karen K. Grames on 18th November 1993, where they invited their beloved ones.

The duo lived the most romantic moments for a year, but they separated in early 1994. They further filed a divorce and confirmed their separation on 17th August 1994.

Upon their divorce, Richard met an American software engineer, Suzanne Marie Mergele and started dating for a while. The two united as husband and wife on 6th August 1999, in Las Vegas, Nevada. After staying married for ten years, they divorced on 14th August 2009.

As time passed away, Richard and Suzanne again interacted and later got remarried in January 2015. Nonetheless, the duo's marriage won't last long this time and divorced one more time in 2019.

Just like Rawlings, Suzanne also married thrice, but her first marriage is still a secret to the media, and even the name of her first mysterious husband is hidden. Then, she married Carlos Venegas, but the same as her first marriage, this one also ended on divorce.

Suzanne and Carlos welcomed an adorable son, Sinjin Venegas, who's now an American actor and screenwriter. He came to limelight portraying the role of Ethan in the TV series, Barney & Friends, in 2006.

American entrepreneur, Richard has an impressive net worth of $20 Million as of 2019. He earns a lucrative salary from his profession. According to Simply Hired, a salary of the proprietor at Gas Monkey Garage is $182,556 per year.

Check out the interview of Richard Rawlings with Fox 4 News

Rawlings is also an executive producer of his reality-TV series, Fast N' Loud on Discovery Channel. Furthermore, his show is rated 7.5 stars out of 10 from 2,258 ratings by the viewers. His first episode of the show gained much popularity than his other episodes as of now.

Resides in a Luxurious Accommodation

The American TV personality, Richard Rawlings, currently lives in a lavish house located in Dallas, Texas. He bought his rooftop at $1.89 Million in 2015, which is measured on 4,234 square feet.

Rawlings' residence features four bedrooms, three and a half bathrooms, a big dining room, and a furnished kitchen with flourished ceilings. It also consists of a glass-shaped swimming pool and a hot bath spa.

Richard Rawlings is quite passionate about cars, in which he brings old model vehicles and turned them into such sports and fully-designed models. He loves to posts pictures of his modified cars on Instagram, as well.

In one of his Instagram posts, Rawlings is seen posing with a 1972 Pantera model car in Dallas, Texas, in front of his Gas Monkey Garage on 23rd October 2019. He also participated in a motors exhibition program, SEMA Show, with an old model from Budnik Wheels on 5th November 2019.

Richard is fond of wearing sneakers all the time and loves to buy Travis Scott's Air Jordan 1 Low sneakers. During his working time at Gas Monkey Garage, he wears sneakers because it makes him comfortable and easier to do work.

On 21st August 2019, Rawlings shared a picture while holding his amazing sneakers, which he purchased from the best sneaker showroom, Off The Cut Show in Dallas, TX, via Instagram. As of now, the price of Travis Scott's Air Jordan 1 Low sneakers is $1,099.

As an author, Richard Rawlings wrote his first book, Grievance Procedure And Administrative Justice in 1987. The book is about the review of social, legal research reports of the government and the law committee of the economic and social sectors.

Rawlings further co-wrote and published a book, Delineating Wales: Constitutional, Legal and Administrative Aspects of National Devolution, which is about the politics and society in Wales on 26th November 2003. The price of his book is $20.88 in hardcover, including eight old ($5.46) and eight new ($15.42).

Richard's third book is Process and Procedure in EU Administration, which expresses the details about the administrative procedures of the European countries all over the world. As of now, his book costs $53.02, consisting of six new ($54.95) and four used ($17.00) in paperwork. But, you can, but it at $45.54, save $9.41 (17%) through Kindle.

The reality TV star also wrote a book, Fast N' Loud: Blood, Sweat, and Beers on 31st May 2016, in which he explains the success of his automotive restoration show's impact in the modern world. He listed his book for $14.39 in paperback and $12.01 in Kindle's price.