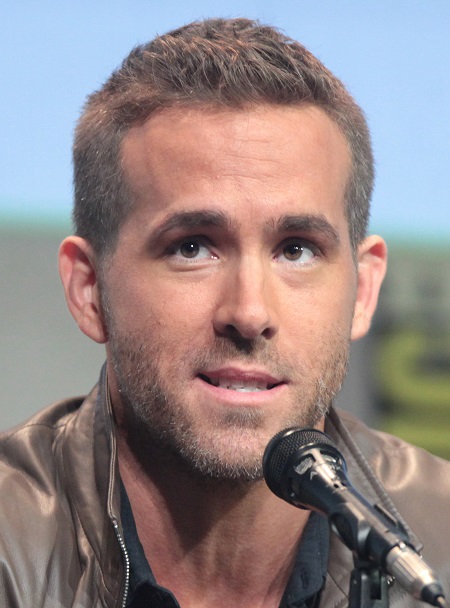 Ryan Reynolds is a Canadian-American actor, film producer, and entrepreneur who has established himself as one of the notable names in the entertainment industry. Well, he made his TV debut by starring as Billy Simpson in teen soap opera Hillside. His comedies, dramatic and action films are Life (2017), The Proposal (2009), Deadpool (2016), 6 Underground (2019).

Ryan Rodney Reynolds was born on born October 23, 1976, in Vancouver, Canada. He is the youngest four sons of retail saleswoman Tamara Lee and James Chester Reynolds, a food wholesaler. He has three older brothers named Jeff Reynolds, Patrick Reynolds, and Terry Reynolds. So far, he is a graduate of Kitsilano Secondary School. As per his citizenship, he is Canadian, American and is of Irish and Scottish ethnicity.

The teen soap opera star Ryan weds Green Lantern co-star Blake Lively. She is an LA-based actress who is known for her role Serena van der Woodsen in the CW teen drama series Gossip Girl from 2007 to 2012.

Reynolds, 43, first met his future wife, Lively, 32, in 2010 on the set of film Green Lantern. Next, they started dating in October 2011. Finally, the couple tied the wedding knot on September 9, 2012, in a hush-hush private ceremony.

Their big day took place in Mount Pleasant, South Carolina at Boone Hall Plantation infornt of their loved ones. Before marriage, they have dated for a year. Now, they have completed their seven years of marriage and 8 years of togetherness.

From their union, Blake and her husband, Ryan are blessed with three daughters. Thye first gave birth to their daughter Violet Reynolds in December 2014. On September 30, 2016, they welcomed their second child InezReynolds. Their youngest bundle of joy or third born baby girl Betty Reynolds was born in 2019.

Yes, you have that read correctly. The Canadian-American actor got divorced from his first wife, Scarlett Johansson, an American actress and singer.

The pair who started in  2007 announced their engagement news in May 2008. That same year, they got hitched on September 27, 2008, in a private ceremony. Their function was held in Tofino, British Columbia. But after two years, they announced that they are no more together on December 14, 2010.

Was Engaged to Alanis Morissette in 2004

Before Scarlett, the 1.88 m tall actor was also engaged to Alanis Morissette, aged 46, whom he started dating in 2002. She is an American-Canadian singer-songwriter.

They became an engaged couple in June 2004 after two years of love romance. However, the two called off their engagement mutually in February 2007 remaining in good terms after five years of relations.

As of July 2020, Ryan Reynolds has an impressive net worth of $100 million. He credits his worth to his successful career working film producer, actor, and entrepreneur. Over her career, he has worked in comedy and action movies such as The Proposal (2009), Woman in Gold (2015), Deadpool (2016).

His basic salary for Deadpool 1 initially was around $2 million. The film went to gross over $782 million on the budget of $58 million budget, becoming the 9th highest-grossing film of 2016. The second movie, Deadpool 2 earned $785 million globally against the budge of $110 million. Thus for his second installment, he made around $20 million.

Similarly in 2017, he received roughly $22 million from his acting performances. After then, Reynolds is listed in the category of stars who makes more than $20 million. Moreover, he was paid $27 million in 2019 for the Michael Bay movie 6 Underground, which grossed over $150 million.

Apart from that, Reynolds and his wife, Lively purchased nearly 9,000 square feet house in Pound Ridge for $5.7 million in Westchester County, New York which was built back in 1860. Also in 2012, they bought a country cottage in Bedford, New York for $2.35 million but they sold the estate in 2013 for $2.495 million.