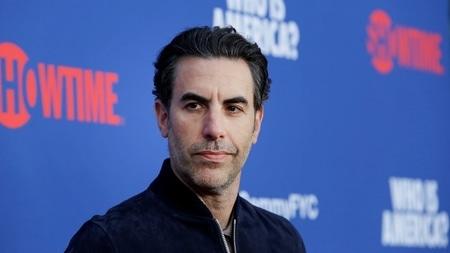 If you have watched movies such as Borat, Ali G Indahouse, The Dictator, then you might be familiar with this immensely talented actor Sacha Baron Cohen. Sacha is famous for portraying characters with over the top dedication. Some of his most prominent roles are Borat Sagdiyev, Ali G, and Admiral General Aladeen.

Sacha was born in West London, the United Kingdom, on October 13, 1971, as Sacha Naom Baron Cohen. He was raised Jewish by his parents, who were also Jewish. He studied in The Haberdashers' Aske's Boys' School and later attended The University of Cambridge and graduated in 1993, where he studied history.

The man behind such iconic characters was wooed early in the 2000s by his now-wife Isla Fisher. Sacha and Isla first met each other in 2002 while attending a party in Sydney, Australia.

The couple would then start dating shortly after and go on to date for two more years before being engaged. In 2004, the pair felt that it was the right time to take their relationship to the next level as they got engaged.

The couple is so madly in love that Fisher even converted to Judaism, the religion which Sacha follows. Fisher completed her conversion early in 2007 after three years of study.

" I will definitely have a Jewish wedding just to be with Sacha. I would do anything—move into any religion—to be united in marriage with him. We have a future together and religion comes second to love as far as we are concerned".

On 15 March 2010, the couple got married in a Jewish ceremony in Paris, France, where there were only six people invited. The couple has three children with the eldest one, Olive, born in 2007 before there marriage.

Similarly, in 2011, Isla gave birth to the duo's second child, Elula. Nearly after four years in 2015, the actress was spotted by the media in a baby bump. She and her spouse were ready for the newest addition of Montgomery Moses Brian Baron. He was born on March 17, 2015, as per TMZ.

The couple is also involved in pranks together, as seen in 2016 Oscars. Baron Cohen appeared as his famous character Ali G to present an award after being told explicitly by the Academy not to do so. Sacha later revealed that his wife Fisher helped him sneak in the make-up and also helped him apply the makeup in the toilet for 40 minutes.

The couple, after 18 years of being together, still seem to be heavily invested in each other. The actress posted a paparazzi picture on Instagram saying synchronized snacking is the secret behind their 18-year romance.

After being together for almost two decades have seen their fair share of ups and downs. They have to manage time between work and family consistently, but they seem to be doing it the right way. Especially after having to raise three children, the pair often travels between Los Angeles and London.

Fisher, in an interview with Australia's Sunday Telegraph, said, Choosing to be together every day is incredibly romantic. The actress further added that she loves marriages, and for her, it's the most crucial decision in her life. She went a little philosophical and said, "Life is filled with highs and lows, and you have a best friend to share it with you."

His meticulous performance in "The Spy"

The comedian with such iconic characters has taken on new challenges in 2019 as the star of Netflix show The Spy. The show is a six-part mini-series that tells the story of Eli Cohen, a Mossad spy portrayed by Sacha. The show takes place in the year 1967 during the 6-day war between Israel and Syria.

The character portrayed by Sacha tries to infiltrate the Syrian Ministry of Defense. He appears alongside Alexander Siddig and Noah Emmerich among others.

The actor has been hailed for his performance in The Spy as a article in Vice read "The Spy' Proves Sacha Baron Cohen Is More Than Just Borat." The actor previously only appearing in comedies had created doubt in some people, if he had what it took to appear in a dramatic genre.

The 48-year-old actor's net worth is an astonishing $130 million as of 2020. He earns his riches from movies and TV shows. The actor has made appearances in over 18 films and 17 TV shows. His most notable performances come from films such as Borat, Madagascar, Madagascar: Escape 2 Africa, The Dictator, and The Brothers Grimsby. The Box office earnings from these movies are:

The star is undoubtedly expected to take home a sizable part of the earnings from these movies. He reportedly earned an estimated $ 29.3 million from his role in The Dictator. This would suggest the star is among Hollywood's top earners, such as Bob Saget. The actor also has many TV shows, including Da Ali G Show, Who Is America?, and The Spy, among others.

Sacha is also involved in philanthropic work and has donated around $1 million to Save the Children for children in Syria and to Help Syrian Refugees in 2015. He also likes to make big purchases evident when he bought his $19 million home in the Hollywood Hills.

The actor is not one to shy away from controversies; he regularly gets himself into trouble, the most recent one coming in the 2020 Golden Globes Awards, where he described Facebook CEO Mark Zuckerberg as a 'naive, misguided child who spreads Nazi propaganda.' The speech came in the Golden Globes, where many people also found Ricky Gervais monologue offensive.

He tries to express the problems in society through his honest commentary and satire as a blunt instrument. The actor uses his characters to make racial or prejudice comments both in movies and real-life appearances. The media criticized the actor for his speech, just like they slammed the host, Ricky.

Cohen is involved in more than just controversies and has multiple lawsuits against him. The actor even managed to be sued by the government of Kazakhstan for a website created for his movie, to which he later replied by saying that he had nothing to do with Mr. Choen as the character Borat.

Sacha also has more lawsuits against him from the likes of students and charity workers. But his most notable suit came when he was sued by former Senate candidate Roy Moore of Alabama for $95 million. This came after Cohen interviewed Moore for his Comedy Central Show 'Who is America?' and alleged him for pedophilia.

His show was highly controversial as he posed as different individuals and got an interview with high ranking government officials in the US government and talking about sensitive subjects such as gun control.

To read more Biographies and Gossips on Actors, stay subscribed to Married Celeb!!!