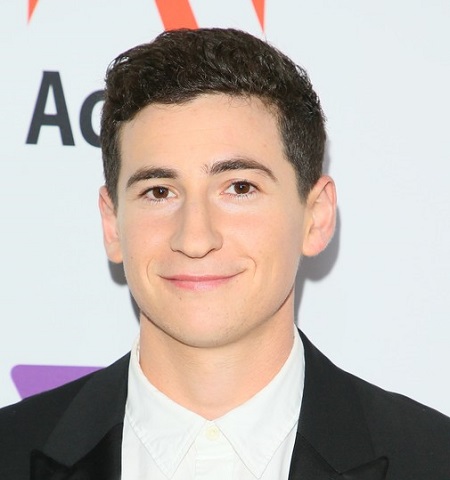 If you are a regular viewer of the American ABC TV series, The Goldbergs? Then Sam Lerner isn't a new name for you who played a recurring role in season 2 to 5 as Geoff "Madman" Schwartz and main role in season 6 to 7. He is an American actor who is also popular for his roles as Quinn Goldberg in Project Almanac (2015) and as Chowder in Monster House (2006).

Sam was born on September 27, 1992, in Riverside, California, the United States as Samuel Bryce Lerner. He is the son of television actor, Ken Lerner and reporter, Patricia Klein. He has a sister Jenny Lerner who is an actress. Also, his uncle Michael Lerner is a well-known actor. So far, he holds American citizenship and is of white ethnicity.

Does The Goldbergs' Star Sam Lerner Have a Girlfriend?

Yes, the 27 years old handsome and intelligent actor Samuel Bryce is no more single. He has already found a supportive partner in his life. Well, are you excited to know who is she? Well, she is none other, Olivia Sui, 27, the YouTuber.

After first introducing indirectly by Shayne Topp, Sam and Olivia started dating in early 2018. In truth, he believed they were so well matched to each other from their meetings that they would never simply be friends. It seems it was love at first sight for Sam

When Sui requests to meet but Lerner declined to let any of them communicate with one another. Because he wanted their previous relationships to be ended. So they began a relationship following Olivia's breakup with her ex-boyfriend.

Now, the cute pair marked their three years of togetherness. Further, they mostly share their romantic pictures on their respective Instagram accounts. Sam recently wished on Sui's 27th birthday on August 15, 2020, by uploading the photo collection on his IG page.

The Net Worth Of American Actor, Sam Lerner

Working in the entertainment industry as an actor since 1997, Sam has garnered a huge amount of money without a doubt. As of 2020, his exact net worth is still under investigation but some tabloids estimated it is around $500 thousand. His main source of earnings is his two decades of an acting career.

Similarly, Lerner gets paid $50307 a year for performing various roles in TV shows and movies. Now, he portrays the ABC TV series, The Goldbergs since 2013. So for his main role, he makes the salary around $20,000 per episode.

Lerner who attended the Hebrew school made his TV debut through TV series Malcolm in the Middle as Patrick in 2003. Since then, he has made appearances in various TV series like Two and a Half Men, The King of Queens, The Secret Saturdays, Suburgatory, Trolls: The Beat Goes On!, Rusty Rivets, and others.

Apart from the television shows, Sam has acted in several films such as Envy, Monster House, Nobody Walks, Project Almanac, Mono, Fun Mom Dinner, Walk of Fame, and Truth or Dare. His pre-production movie is F9 where he plays Julian Banks.