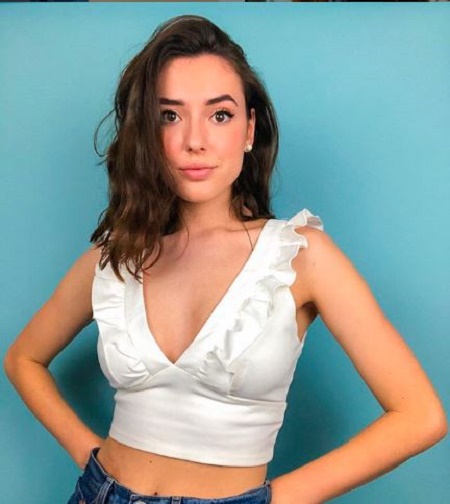 Samantha Fekete is an English-born American actress and social media influencer who began acting at the age of 10 in children's theatre. But, she got huge fame after playing Sam's character in the 2016 comedy series Roommates. Aside from acting career, she is the creator of Totally Trendy, a popular YouTube channel produced from Hi5 Studios.

Samantha Jane Fekete was born on July 11, 1999, in London, England to the mother Christine Fekete and father Doug Fekete. Further, Fekete has four biological siblings including Maxine, Albert John Fekete, and four adopted siblings. She holds American citizenship and is of white ethnicity.

He is none other than Ryan McCartan who born as Ryan Jerome McCartan on June 14, 1993. He is an American actor and singer famous for playing the recurring role at Disney Channel sitcom Liv and Maddie as Diggie Smalls. He is also recognized as American pop band member The Girl and The Dreamcatcher.

165 cm tall Samantha and Ryan have been in a blissful love relationship for over two years. The two started dating in the year 2017 and is still going very powerful. Fekete, 20, and McCarton, 27, first made their love affair public by appearing together in a Samantha's YouTube video without hesitation.

Her Beau Ryan Was Engaged to Actress, Dove Cameron

Yes, it is very true. Prior to dating Samantha, Ryan had been dating an American actress and singer, Dove Cameron, 24. The ex had their first interaction on the set of TV show Liv and Maddie in 2012 and there was an instant spark. And in the summer of August 2013, they went public with their relationship.

After three years of love romance, Ryan who is 6 ft 1 in tall announced his engagement news with his girlfriend turned fiance Dove on  April 14, 2016. “Dedicating my 1,000th post to my fiancée. I can’t believe I get to call you that. Thanks for saying yes,” McCartan wrote on his Instagram post. While Cameron said: “Calling you my ‘boyfriend’ never really felt right anyway. ‘Fiancé’ looks better on you".

But sadly, the Wicked actor and the Descendants star dedicated to ended their relationship. The exes announced their split in October 2016 after nearly three entire years together.

Since their spilt, things between them have been a bit dramatic. Ryan accused that Dove has cheated on him to be with her current boyfriend, Thomas Doherty, 25. Whilst Cameron said that during their affair he had treated her badly.

How Much Net Worth Does Samantha Fekete Have?

The American actress and YouTuber, Samantha Fekete has made a considerable amount of fortune. Although her exact amount of net worth has not been disclosed by any sites, it is valued to be more than $300 thousand as of 2020. Similarly, another TV star Mollie Israel now enjoys the same amount of worth.

Video- Moving On To New Things

Fekete has 218k fan-following on her Instagram page. And through her social media, she has endorsed or promoted various brands including Sugarhigh and Uniqfind. She used to work as a creator on the Totally Trendy YouTube channel behind Hi5 Studios until 2018. The channel features videos about trends in fashion, television and film, the internet.