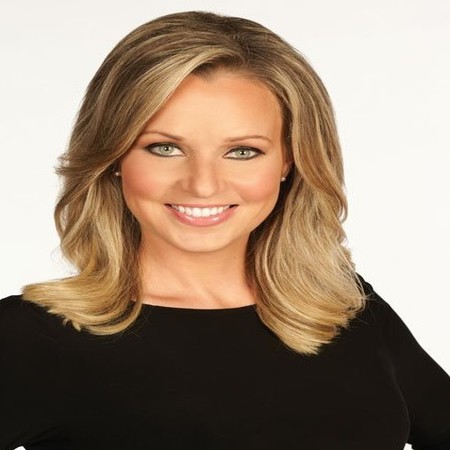 Sandra Smith is an American broadcast journalist, news writer, and producer. Moreover, she is currently working as a  co-anchor of America's Newsroom on the Fox News Channel(FNC). Apart, Sandra joined Fox Business Network(FBN) as a reporter in October 2007. Before joining Fox News, she used to work as a research associate at Aegis Capital Group. Back in 2014, she also co-hosted "Outnumbered" on the Fox News Channel. Now, Sandra is a well-known face in the industry of journalism who has gained a lot of respect and fame.

The Fox News Reporter, Sandra Smith was born as Sandra Kaye Smith on September 22, 1980, in Wheaton, Illinois, USA. Moreover, her father was a floor trader at Chicago's Mercantile Exchange. However, she hasn't revealed her father and mother's name yet. Apart, she is the youngest child among six children. Smith attended Wheaton Warrenville South High School and graduated in 1998. Later, she joined Illinois State University before transferring to Louisiana State University in 2002.

Who Is the husband of Fox News Anchor, Sandra Smith?

Well, Sandra, 39 years old, is a married woman. She is married to her boyfriend turned husband, John Connelly, who is an American business commentator. The couple first encounters each other in early 2009 and felt a special attachment between them. Further, dating each other for sometimes, they got engaged on December 28, 2009.

Moreover, the couple finally walked down to the aisle on May 1, 2010. Their wedding took place in the presence of family and close friends in a private ceremony. Since then the couple is living a happy married life and shares a strong bond between them.

So far, we don't have any news of their separation and divorce to date. Despite being a celebrity face, the couple loves to keep their personal life away from the media and the public. However, the couple shares two lovely children from their long married life. Recently on May 1, 2020, the couple celebrated their 10th marriage anniversary.

Talking about Smith's motherhood life, she is a very happy and proud mother of two lovely children. Sandra, 173 cm tall, became a mother for the first time when she gave birth to a baby girl Cora Bella Connelly, born in June 2013.  Besides, Sandra and John also share a second child from their marriage as a baby boy, John Connelly Jr., born in 2015.

Smith is very protective of her children and always keeps them away from the eyebolt of media and public. Besides, Sandra and John are equally taking the responsibilities of their children's physical and psychological growth. As of now, she is just enjoying her happy motherhood life with her two children and husband in New York City.

The Fox news anchor and co-host, Sandra has collected a hefty amount of fortune from her professional career. Further, she has a net worth of $6 million as of 2020. Besides, she earned around an annual salary of $3 million as Fox's news anchor of America's Newsroom. Apart, she used to work as a research associate at Aegis Capital Group which might also help her to uplift her net worth.

Besides, she also earned extra money by news writing and producing it. On the other hand, her husband, John also earned a decent amount of money from his career as an American business commentator. He has a net worth of $1 million. As of now, she living a happy married life with her husband and two children.