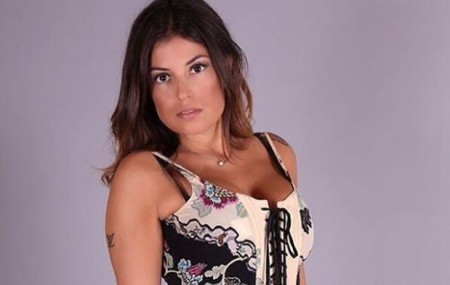 Leaving a dark past and building a new future can be both difficult and intimidating. Likewise, Italian television personality and actress, Sara Tommasi has had her fair share of ups and downs. She went on to become an adult actress and later a director at an Italian football club, Marruvium. Tommasi was also said to be involved in a major prostitution ring which was linked with former Italian prime minister, Silvio Berlusconi.

Sara was born on June 9, 1981, at Narni, Terni, Italy. Her mother's name is Cinzia, while there is no information about her father. Sara earned a degree in Economics from Bocconi University. She took acting lessons in Milan and New York. In late 2015, Tommasi made a bizarre career switch to become the director at an Italian football club, Marruvium.

Looking at her Instagram accounts, it seems that Sara is currently in a romantic relatioship with Antonio Orso, who is also her manager. Sara has credited Antonio for helping with her recovery. On September 21, 2020, Tommasi shared a picture with Antonio along with a caption: "You made me happy and made me smile again !!! I love you."

Sara and her partner, Antonio is yet to be married. When the actress shared a picture wearing a wedding dress, her fans thought she had tied her knot. However, the image was taken from a video, a recent project of Tommasi.

In an interview, Sara revealed she left her longtime boyfriend after she moved to Milan. Then she began dating actor, Davide Silvestri. Additionally, Tommasi had a short fling with Giorgio Mastrota, and Lazio midfielder, Valon Berahmi.

While Tommasi was in the United States, she dated a man with whom she stayed in a relationship for four years. There are rumours of her dating famous footballers like Mario Balotelli and Ronaldinho. However, the story was just publicized news by the media.

It is known to the general public that Tommasi had a very good relationship with former Italian Prime Minister, Silvio Berlusconi. She gained huge media attention after appearing in Silvio's parties. Later, she became a major suspect on a big prostitution ring which ended Silvio's political career.

There is no exact information about Sara Tommasi's net worth. At present, she is no longer active in the television industry. However, she appears in music videos, photoshoots, and small media projects.

Tommasi has appeared in a few shows like Distretto di polizia (2000), Crimes (2006), and Tutto l'amore del mondo (2010). Before becoming an actress, Sara was a model and appeared topless in the 2007 Max Calendar shoot. In 2011, she appeared in a miniseries Follow Your Dreams. Likewise, she starred in an adult movie in 2012.

Sara made a unlikely career switch as she was recruited by the amateur soccer club Marruvium to be it's director in 2015. Some former adult actors like Jessica Hayes and Deven Davis also has a decent wealth.

The 39-year-old Sara Tommasi was said to be one of the most beautiful Italian actresses. However, as time passed she became involved in more disturbing events. Tommasi began appearing nude in shows and even appeared in some explicit movies. But there was a reason behind her act which Sara now regrets.

As per Sara, she suffered from a bipolar disorder. She appeared in an explicit movie along with art critic, Andrea Dipre. And Tommasi later recalled at the time she was heavily into drugs and glamorous lifestyle. She even used to make public appearance showing her private parts.

The most high-profile scandal in Sara's life occurred in 2011. In November 2010, a 17-year-old Moroccan belly dancer and alleged prostitute Karima El Mahroug a.k.a Ruby Rubacuori claimed she was paid to have sex with former Italian Prime Minister, Silvio Berlusconi.

Tommasi had a very good relation with Berlusconi and she even appeared at his high-profile parties. Therefore, the Naples Public Prosecutor's Office even searched her home as part of the investigation on a prostitution ring and the trafficking of false money.