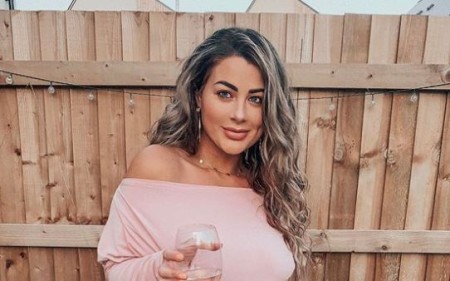 The 27-year-old, Jessica Hayes is a British model, reality tv personality, and Instagram star. She is best known for appearing in the first season of the ITV2 reality dating series, Love Island. Jessica ultimately became the show's winner with fellow contestant, Max Morley.

Hayes was born on April 23, 1993, in Gloucester, England. Since an early age, Hayes became interested in modelling. The details about her family life and educational background are unavailable. However, Jessica previously acted as an adult actress under the name Anna Jeffries.

The beautiful reality star is an engaged woman. She is soon going to be the wife of her longterm partner, Dan Lawry. The couple is old-time friends who started dating back in August 2018. After six months of a relationship. Jess and Dan got engaged.

Dan is a mechanic who works at JF Physique Works located in Oxfordshire. He and Jess welcomed their first child, a baby boy named, Presley James Lawry on June 27, 2019. On the occasion of their child's first birthday, both Jess and Dan shared a sweet message on their respective Instagram accounts.

Jessica hasn't revealed anything about her future wedding plans. As of now, the couple is enjoying their role as parents. Further, the duo loves tattoos and has a matching coronary heart and turtle tattoo inked on their thumbs. Former Love Island cast, Alex Bowen and Olivia Buckland became the first Islanders to tie the knot.

While Jess was in the Love Island villa, she coupled up with English media personality and cricket player, Max Morley. However, soon after leaving the villa, the couple broke-up.

In 2016, Hayes was said to be dating a hairstylist named, Jay Birmingham, which was never confirmed. Likewise in late 2016, Hayes was seen spending some time with model and hairdresser, Sam Reece. The two are just friends.

The beauty influencer and fashion designer, Jessica Hayes has a net worth of  $700,000 as of 2020. Since she departed from Love Island, Hayes has been earning a substantial amount of money from her modelling and sponsorship deals.

As the winner of the first season of Love Island, Jess and fellow contestant, Max received a total of $64,725 as prize money. Afterwards, Jessica began getting endorsements deals from beauty products and clothing lines. However, the exact details of her earnings are unknown. Some of the brands which Hayes endorses are Elixinol, Rebelliousfashion, Placentaplus, etc

Jessica was nominated for the National Reality TV Award for Reality Personality of the Year. She currently works at Teleperformance, a business process outsourcing company. Further, she owns a stunning black Range Rover for her ride.