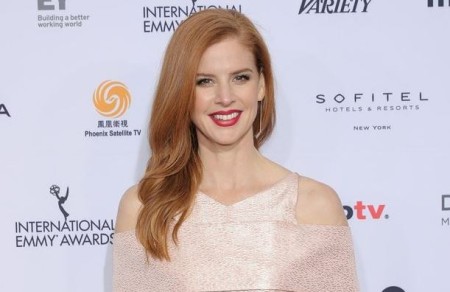 Are you a fan of television series and if yes then have you watched the popular USA Network's legal drama, Suits? The series which featured the Duchess of Sussex aired from June 2011 until September 2019. And today we are going to explore some interesting facts about Sara Rafferty, who gained wide recognition for portraying the role of Donna Paulsen on Suits.

Sarah Gray Rafferty was born on December 6, 1972, in New Canaan, Connecticut, the United States. She is 47 years old as of 2020. The television and stage actress has appeared in several successful films and television.

Sarah's Inspirations are her Parents

Sarah is the youngest of four daughters born to parents, Mary Lee Rafferty (mother) and Michael Griffin Rafferty Jr. (father). Her mother served as the Chairwoman of the English Department of Convent of the Sacred Heart school. Likewise, her father is an accomplished painter who previously worked in finance. Sarah credits her parents for nurturing her passion for arts. She has Irish ancestry.

Who is Sarah Rafferty's Husband?

The Suits actress has been married to her longtime husband, Aleksanteri Olli-Pekka Seppala since 2001. The couple exchanged their wedding vows on June 23, 2001. Further, their wedding ceremony took place at the Roman Catholic Church of St. Mary in Greenwich, Connecticut. They have been married for over 19 years as of now.

The couple shares two lovely daughters named, Oona Gray (b: October 2007) and Iris Friday (b: January 2012). The family of four has a joyful life, and they reside in Toronto, Canada.

The talented actress, Sarah Rafferty, has a net worth of $8 million as of 2020. She has amassed such an impressive fortune through her acting career. Over her two-decades-long professional journey, Sarah has appeared in many television shows and movies.

Among her movies, the 2006 romantic film, 'The Devil Wears Prada' became a box-office hit with a total collection of $327.9 million. Sarah's most notable work was portraying the leading role of Donna Paulsen on Suits from 2011-2019. For her part, she reportedly received $300,000 a year.

It is essential for actors to keep a harmonious work environment. Also, their performance will be affected if there is no connection. However, Sarah has a strong relationship with her Suits co-stars. She is especially close to Gabriel Macht, and the two have been friends for over 27 years.

Similarly, Rafferty is pretty close to Meghan Markle, the Duchess of Sussex. Further, she was one of the guests at Markle's wedding to Prince Harry in May 2018. Likewise, Meghan invited Sarah to her baby shower in February 2019.

Meghan and Sarah have been good friends since the premiere of Suits. The USA Network cancelled the series after its ninth season. The show's broadcaster announced the news after the series lost two original stars, Meghan and Patrick J. Adams.

Apart from her acting career, Sarah is active in charity works. She makes donations to several organizations such as Alzheimer's Association and The Brain Project. She served as the host of Sardi's event annual night for two consecutive years which helped in support and research of the Alzheimer's Association. Further, she is an ambassador of The Brian Project.

In June 2017, she received the Praeses Alit Award for her contribution in television. The TCD Law Society gave her award in recognition of her achievements in the field of acting.