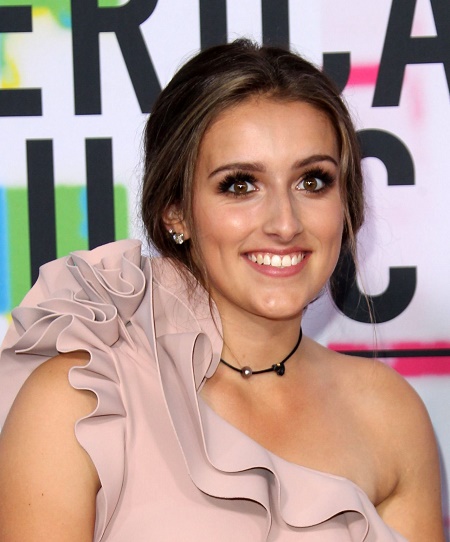 Savannah Blackstock is Brandon Blackstock’s first-born kid with his former wife, Melissa Ashworth. Her mom and dad stayed in a marital relationship for about 11 years from 2001 to 2012. For now, she lives with her father and stepmother Kelly Clarkson, a notable TV personality.

The 17 years old beautiful child was born on June 7, 2002, in Nashville, Tennessee, U.S.A. as Savannah J. Blackstock. Moreover, her grandparents are Narvel Blackstock (Television producer), Elisa Gayle Ritter. So far, Savannah holds American citizenship and is of white ethnicity. Further, she is a horse rider.

Has Royal Connection with Stepmother, Kelly

After getting hitched with Brandon, Kelly became the proud stepmom to Brandon’s two kids, Seth, and Savannah. Clarkson even said:  “We all live together and everything. It’s so different, but it’s perfect. They’re awesome, and I actually really dig the mom thing,” on On Air With Ryan Seacrest.

More to that, Savannah may not be Kelly's biological child, but The Voice judge has often gushed about her incredibly open and honest motherhood relationship with Savannah.

Not only Kelly but also her step-daughter have no problem spending time with her step-mom. Moreover, Savannah has already joined Kelly on the red carpets award show. So she now enjoys taking part in equestrian competitions and already has some wins under the belt.

Does Savannah Blackstock have a Boyfriend?

The beautiful lady, Savannah Blackstock is living a single life and has no boyfriend as well. She wants to keep most of her intimate things inside her. So far, she never uploads the picture of her potential boyfriend to date according to her Instagram post. So it's hard to say whether Blackstock is currently dating someone or not.

\Now, let's talk about her parent's married life. Her mother, Melissa Ashworth, and father, Brandon Blackstock officially tied the knot in 2001 among their family and friends. But later after being together in matrimonial union for one decade, this couple parted their ways in 2012. But the reason behind their divorce remains confined.

After division with his ex-wife Melissa, father, Blackstock still takes guardianship of these two adorable babies, Savannah, 17 and Seth, 13.

Savannah's father Brandon Blackstock remarried his second wife, Kelly Clarkson on October 20, 2013, after getting divorce with her mother, Melissa.

The winner of the first season of American Idol (2002) and the manager of Shelton Live: It's All About Tonight (2010) celebrated their big day in Walland, Tennessee at Blackberry Farm. The bride, 37, wore a Temperly London gown with tiny buttons and a v-neckline whereas the groom, 43 on their special day.

Similarly, after dating for a year, the couple has announced their engagement on 14th December 2012. Brandon even proposed his future wife with a yellow canary diamond ring.

Likewise, they first met in 2006 after Brandon's father Narvel Blackstock (Kelly's manager) introduced the two. Brandon was still married to ex-wife Melissa Ashworth at the time but later Narvel reintroduced Kelly and Brandon in 2012 after the divorce of his son.

Savannah Blackstock has three younger siblings. Her biological brother Seth Blackstock is 13 years old now who was welcomed on November 21, 2006.

Another two half-siblings River Rose Blackstock born on 12th June 2014 (age 5 years) and Remington Alexander Blackstock born in 2016 (age 3 years). Now, the two brothers and two sisters are very close to each other.

The American Idol alum's step-daughter Savannah is a horse rider who owns horses The Unicorn and Albie. She even wins numerous competitions and trophies such as the Bates Preliminary Junior / Young Rider Championship along with being awarded the Littorian Trophy for being top-placed young rider in the Carolina International CCI2.

In United States, the Horse Rider receives between $47,067 and $69,969 thus, Blackstock might paid in the same range. Meanwhile, Brandon Blackstock made a substantial amount of fortune as a professional manager. His net worth is estimated at $5 Million as of early 2020. In addition, as a producer at the NBC show named The Kelly Clarkson Show, he makes $116,000 annually as a salary.

On the other hand, her grandfather Narvel Blackstock acquires $60 million worth. He made this amount throughout his musical profession and as by his company, Starstruck Entertainment. Whereas his stepmother Kelly Clarkson enjoys $45 million net value throughout her career as a singer, songwriter, actress and television personality.

The artist of My December and All I Ever Wanted makes a salary of about $13 million. Her current income on NBC's The Voice is $560,000 per episode. Likewise, as a judge on The Voice, she amasses the $560,000 salary per show.