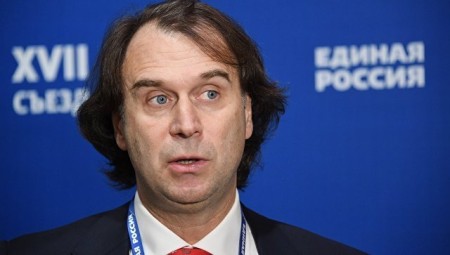 Sergey Fyodorovich Lisovsky was born on April 25, 1960, in Moscow, USSR. He is 60 years old as of 2020. He is a married man and has a son as well. There is no detailed information about his early background, but let's know what we have found about his personal life.

Born into a family of Physicists

Sergey's father, Fyodor Viktorovich Lisovsky was a renowned personality in the scientific community. A doctor of Physical and Mathematical Sciences, he was the professor at the Institute of Radio Electronics of the Russian Academy of Sciences.

Similarly, Sergey's mother, Inna Fyodorovna Lisovskaya worked as a longtime teacher of physics at a school. Talking about Sergey's academic background, he graduated in radiophysics from the Moscow Power Engineering Institute in 1983.

The senator is married to his longtime wife, Anna Minayeva. The exact detailed information about their dating history is unavailable. However, as per some sources, they married in the mid or late 1990s. Further, Sergey and his wife, Anna have been married for over twenty years as of now.

Sergey and his spouse Anna welcomed their son, Maksim in 1999. The family of three resides in Russia. The information about Anna's professional history is unknown. She rarely makes an appearance with her husband in social events. Also, Sergey prefers to keep his personal life secret.

Apart from having a busy schedule, Sergey loves to do adventurous things. He likes to drive a helicopter, mountain climbing, hang gliding, golf, and pilotage.

The member of the Russian Federation, Sergey Lisovsky's net worth is a mystery. However, his fortune might not be less than $1 million. Before becoming a politician, he was a businessman and a television broadcaster. An article published in Forbes stated that Sergey was already a wealthy man and he made his fortune from a chain of Moscow discotheques.

Sergey worked in various high-profile positions throughout his career. He is the founder of a production company called, Rice-LIS'S. Likewise, he launched Russia's first music channel, K-10. Since 2013, he has been broadcasting a program called, Capital on RBC TV. Therefore, Sergey might earn somewhere between $200,000-$232,000 a year from his work. Politicians like Pete Buttigieg and Michael Steele also has a decent income.

Was Sergey involved in the murder of a journalist?

On March 1, 1995, a Russian journalist named, Vladislav Listyev was murdered. He was shot dead when returning from the live broadcast of his evening show. The person who ordered his killing and the gunmen's information is still missing.

Lisovsky's business had been connected with some of the former criminal characters. Hence, he was a suspect in the criminal case. Also, Vladislav announced to break Lisovsky's advertising monopoly just a week before his death. However, Sergey was never arrested.