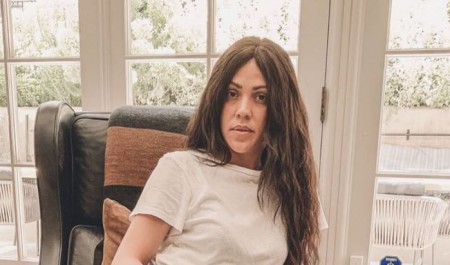 The American beauty specialist Shani Darden works as an esthetician, who is known as Los Angeles' favorite and busiest facialist. Shani Darden's clients include camera-ready types actresses like Huntington-Whiteley, Emmy Rossum, and Jessica Alba. Further, Shani is the developer of her own lactic acid peel-with microcurrent, LED, oxygen, and ultrasound.

The beautiful beauty skin-expert, Shani Darden is happily married to her longtime husband, Anthony Ferrari. The couple exchanged their wedding vows on May 11, 1998. Also, their marital solidarity marked 21 years on 21st May of 2019.

The longtime husband-wife duo first met in Los Angeles. During that time, Shani worked as a model, while Anthony worked in the television shows.

Shani and Anthony never miss any chance to show their love for each other. They regularly share sweet messages on social media praising each other's parenthood.

Most of the married couples struggle to sustain the spark on their romance. If both spouses are always busy on the respective profession, then chances are high of personal misunderstanding. However, Shani Darden and her husband, Anthony Ferrari, is an exception.

Married for over two decades, the pair still looks fresh as a young couple. Further, they are blessed to have two daughters in their life. Despite their hectic schedule, Shani Darden and Ferrari often visit exotic places for vacations. One such occasion was on August 10, 2019, the family of four visited Cabo San Lucas located in Mexico.

Why Darden's Husband Anthony is Familiar?

One of the popular soap operas on television is "The Bold and the Beautiful." And how Anthony Ferrari is associated with it? For your information, he has been working as the senior vice president of operations of the show since 2012.

Previously, he worked as international marketing and distribution for the show from 2008-2012. Recently in 2019, Ferrari won the Daytime Emmy award for the outstanding original song written for the show.

From their marital relation, Shani and her spouse, Anthony, share two beautiful daughters. Both spouses share plenty of their children's picture on their Instagram. Their parents haven't revealed their actual date of birth.

Their eldest daughter, who goes by the name P seems to be around the age between 11-13 years old. Likewise, their second daughter named Lennon appears to be under the age of 10.

On the occasion of Mother's day, Shani shared a picture of both her daughters and said that raising two girls was her life's best accomplishment.

Shani Darden, the founder of a fast-growing beauty brand called, Shani Darden Skin Care has a net worth of $2 million. Unlike other make-up artists like Karissa Bodnar, Darden is just working on her skincare products on a small scale. But, she has some of Hollywood's top actress as clients.

The primary source of Darden's wealth is her professional career as an expert esthetician. Over the past few months, she is busy expanding her beauty products such as retinol, face-masks, serum, etc.

Darden's path to Hollywood skin-care fame began with a career as a model and backup dancer. In her early career, she appeared in music videos for Destiny's Child and LL Cool J.

She is a licensed esthetician and has knowledge of acne and other extreme skin conditions that serves as the foundation for her transformational methods.

Shani advanced in the luxurious spas and reputable clinics of Los Angeles. Further, she had tenures with Argyle Salon and Spa, le Spa and Kinara Skincare Clinic.

In 2013, Shani launched her skin-care line products, including cleansing serum, toning essence, and oil-free moisturizer. One of her face serum quickly became a cult favorite. Similarly, in January 2018, she launched a few more products such as lactic acid peel-with microcurrent, Led, Oxygen, and ultrasound.

In June 2019, Shani celebrated the opening of her first studio located in Beverly Hills. Jessica Goldin is the brand's current CEO. Well, she has created a simple, elegant, and versatile product for different skin types.