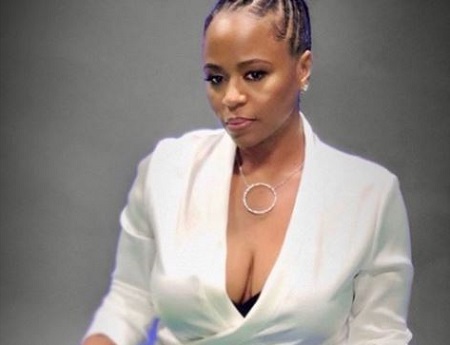 It's become very easy to grab the public's attention when you are connected with famous celebrities. This is the same case of Shante Broadus who came to spotlight after marrying an American rapper, Calvin Cordozar Broadus Jr., known as Snoop Dogg, and previously Snoop Doggy Dogg.

She is a businessman who currently runs Boss Lady Entertainment company. Also, she owned a clothing line named Cocoa Reeve. Let's talk a little sneak peek about her in the following sections.

49, Shante and Snoop, 49, have been happily wedded for about 23 years. They were high school sweethearts and tied the knot on June 12, 1997, in a private wedding ceremony. Their big day was held at Marina Del Rey’s The Ritz Carlton.

But, the rapper Dogg filed for divorce on May 21, 2004, citing irreconcilable differences after seven years of marriage. Later, he confirmed having extramarital affairs multiple times during his music tours.

However after realizing the importance of his wife, Snoop Doggy withdrew his petition. On January 12, 2008, they renewed their wedding vows. During this time, their daughter Cori was diagnosed with lupus and her condition stopped them to get separated.

Mrs. and Mr. Broadus are doting parents of three grown-up children, two sons and a daughter. Before their nuptials, they had two sons. At first, the couple welcomed their firstborn son Corde Broadus born on August 21, 1994.

Corde quit football to pursue a career as a filmmaker. Their second-born child or youngest son Cordell Broadus was born on February 21, 1997, who is following his father's footsteps. He is a graduate of Bishop Gorman High School (2015), and University of California: Office of Vice Chancellor.

After two years of their mating, Shante and Doggy welcomed their youngest child or single daughter, Cori Broadus, on June 22, 1999.

Husband, Snoop Shares One Son From His Ex- Laurie Holmond

Besides being a mother of three, Shante is also stepmom of his husband's son Julian Corrie Broadus, from his love affairs with ex- Laurie Holmond.

The world was unaware of the relationship between the Snoop and Julian until 2008. Later, Laurie confirmed that she dated Snoop in high school in California. Though Snoop was already in the nuptial knot, the couple was romantically linked, which leads them to greet Julian.

The legendary rapper took all the responsibility of his son Julian. Also, he is taking good care of him and often visits him.

In 2015, Shante and Calvin Cordozar became a grandparent for the first time in 2015. Their eldest son Corde, 26, welcomed a son named Zion Kalvin in 2015 with his then-girlfriend, Jessica Kyzer.

Further, Corde and his current girlfriend Soraya Love welcomed their firstborn daughter Elleven Broadus on August 17, 2018. Also, they had another son Kai Broadus, born on September 15, 2019. Unfortunately, Kai died on September 25, 2019, just 10 days after he was born.

Two days after the child’s death, he confessed that his baby boy died in his arms and that he would never forget that feeling. He said: “My son did all he needed to do in his 10 days here on Earth. He has now graduated and continuing to do work.”

At the current time, Broadus and Soraya have been together for the past few years. Also, they take care of their two years old baby girl Elleven.

Shante Broadus has an estimated net worth of $5 million, which she has earned from her business career. Meanwhile, her husband, Snoop Dogg's net worth is over $135 Million as of 2020. In 2016, he earned a total of $13 Million to his account while in 2017 he bagged around $17 Million.

Similarly, he added $15 Million in 2018 alone, everything from his dynamic career in the music industry. Apart Snoop and Shante has many houses in the US including a mansion in Claremont which today's market price is over $2 Million.

Furthermore, he has dozens of cars collection which include 1968 Buick Riviera, 1968 Cadillac Couple DeVille, 1967 Cadillac Deville Brown Sugar, and Polaris Slingshot The Batman.

Shante Broadus was born on October 30, 1971, in California, United States as Shante Taylor. But her parents' identity is not known to the media. She has two siblings a sister Sharelle Fuller and a brother Jermaine Fuller.

As per her citizenship, she is American and is of African-American ethnicity. Regarding her education, she is a graduate of Long Beach Polytechnic High School.