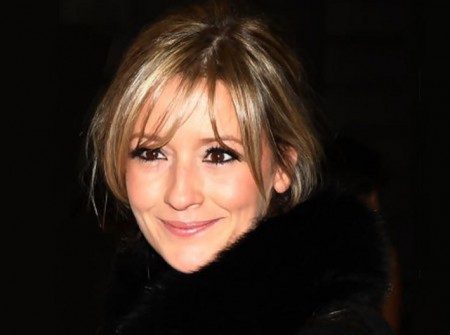 The lovely Sophie Dymoke is not involved in the media world neither she knows the glamour industry. However, she often makes headlines for her relationship with an English actor, Matthew Goode. Miss Dymoke gained fame after she married her Chasing Liberty' star husband. Just like Chelsea Kilgore who became famous after her marital relation with renowned basketball player J.J. Redick. So, today, this article aims to provide some insight into her personal life.

Who is Sophie Dymoke?

Sophie Dymoke is a celebrity partner of the talented actor, Matthew Goods. He is known for movies like Chasing Liberty, The Imitation Game, The Crown, A Single Man, etc. among others.

Apart from her relation with Goods and her profession, nothing much is known about Dymoke. But per some reliable sources, Sophie was born around 1982; hence her age is 37 years. Also, she hails from Tunbridge Wells hometown.

She attended the Sacred Heart School located in Tunbridge Wells. Later, she graduated with a Bachelor's degree from the University of Wales. By 2002, she was working as the Head of Sales for a company called, Alice+Olivia.

Afterward, Dymoke started working for a company called Vince as a Sales director. Since 2012, she has been working for MiH Jeans as the Sales Director. Also, she is an interior designer.

The stunning Sophie Dymoke is a married woman. She has been married since 2014 and shares three children with her spouse. To date, there are no rumors of the couple's separation, neither they have been involved in any controversy.

Back in 2005, Sophie began dating her boyfriend, Matthew. The couple lived together as partners for nine years and finally married each other in 2014. Further, they haven't revealed about their first encounter and the beginning of their romance yet. But few sources claim that they met through mutual friends.

Despite being a celebrated actor, Matthew often told the media to stay away from his personal life. Hence we can say that Goode doesn't see his private life as a public concern.

During their relationship, the couple had a daughter and fans immediately speculated that they were already married. However, the lovebirds maintained a low-profile and only married after nine long years.

As of now, Sophie and her husband have a healthy relationship. To date, they are not involved in any rumors or controversies. Hence, we can say that their marital relation is blissful.

The family often split their time between the U.S and U.K due to Goode's profession. Some sources claim their permanent residence in the UK.

The details about Sophie's net worth and earnings are unavailable. But we know that she works at the MiH Jean company as their Sales Director, so her income might be pretty good. By assumption, we can say that Dymoke has a net worth of over $300,000.

On the other hand, her spouse, Matthew, has a whopping net worth of $3 million. Throughout his career, Goode played the lead character in the hit movies and TV shows. Some of his films have generated an excellent revenue at the Box-Office such as Allied, The Imitation Game, Watchmen, among others.

The average salary for an interior designer varies according to the nature of the project. Per year their income ranges from $25,000-$56,000. Hence, Sophie also might earn in the same range. Likewise, she is also a sales director therefore, her earning is over $98,000.