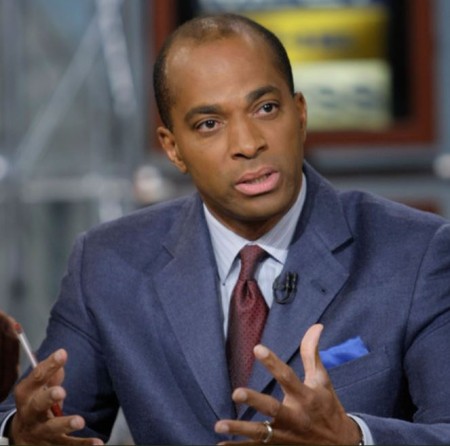 Seven times Emmy Award-nominee journalist, Ron Allen is famous for working as a correspondent for all the NBC News network's news programs. He is also well known for his collaboration with the MSNBC Live. Currently, he is corresponding for the NBC Nightly News with Lester Holt.

Allen was born in 1957 in London, Ohio, United States. Moreover, he holds an American nationality and is from an African-American ethnic background. Other than that, he is a married man as of 2019.

Concerning his career, he is a veteran journalist and works with other NBC media personalities like Lester Holt, Kristen Welker, and many more in the same organization.

The NBC correspondent, Allen is bonded in a romantic relationship with a television news correspondent, Adaora Udoji. The two united as husband and wife on 5th October 2002 at the First Unitarian Universalist Church in Ann Arbor, Michigan.

At the time of their wedding, the groom, Ron, was 45, and his bride was 34. His spouse is the daughter of Mary and Godfrey Udoji, who's are the natives of Ypsilanti, Michigan. Allen's father-in-law is the chief engineer for the City of Dearborn, Michigan, and his mother-in-law is the director of the Washtenaw County Library in Ann Arbor.

The couple announced that they're going to welcome a baby shortly after two years of marriage in 2004. Later, Udoji gave birth to a beautiful daughter on 22nd July 2004, but the name of their child is still hidden as a secret.

How Did They First Met?

The couple had their first encounter while covering the O.J. Simpson's court case for ABC News in 1995. They further became friends, and suddenly, a moment took place in mid-1999 during a convention of the National Association of Black Journalists in Seattle. While there, they both had a short conversation between them where Udoji gave a sweet compliment about his work.

The two began to work for NBC News since the summer of 2001. While working together, they created fantastic chemistry. Ron then decided to propose Udoji and bought a precious ring for her. But, he hid the ring in his London apartment and started thinking about a particular place and time to propose on 10th September 2001.

In the same year, the World Trade Center and the Pentagon were struck off. Immediately, Allen was ordered to Islamabad, Pakistan. On 18th September 2001, he was also assigned to report in Islamabad, where they eventually saw Udoji. He then proposed her surprisingly after returning in December to London.

The 62-year-old journalist, Ron Allen, has a net value of $1 Million as of 2019. He makes a handsome income from his notable work as a correspondent. In the United States, an experienced journalist receives $163,490, according to Working Mother.

Allen appears on NBC's television program, MSNBC Live, as well as in Weekend Today, which has the world's most significant revenue throughout its live telecast. Just like him, Vicky Nguyen and Kate Bolduan are also NBC News's prominent journalists.

As an Outspoken Journalist

Ron Allen started his career as a journalist in the news documentary series, 48 Hours in 1989. He later appeared as a correspondent for the TV special, NBC News Decision in 2010. He also worked in the news TV show, Rock Center with Brian Williams.

Allen got his big break while working with the news talk show, Politics Nation with Al Sharpton from 2013 to 2015. He also worked with the news television shows, including For the Record, and Weekends with Alex Witt.

Find Out More Delightful Biographies And Gossips At Married Celeb!!!