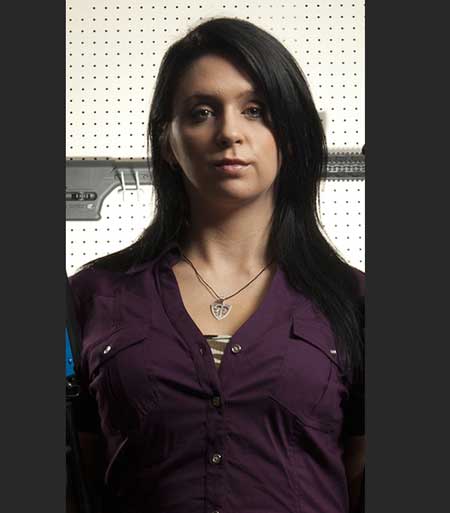 Stephanie Hayden is the wife of Son of Guns star Kris Ford. She came into the limelight as a firearm specialist in her show. Stephanie, along with her father and her husband, ran the show until her father was imprisoned.

Stephanie was born in 1986 to William Hayden and Rachel Hayden in Louisiana. She holds an American nationality and comes from a white ethnic group. She is the only child within the family with no brother or sister. Further, she has not revealed anything about her educational degrees either.

As of now, Stephanie is a happily married woman. She is spending her quality time with her husband Kris Ford. The couple tied the knot in 2011 in midst of their loved ones.

However, the pair has successfully managed to keep their wedding details a secret. But we know that the duo first met each other while working at the Red Jacket Firearms LLC. This is Hayden's second marriage.

Previously, Hayden walked down the aisle with William Scott. She has a son from her previous marriage and two children from her current wedlock. This secretive nature of the reality stars is also shared among other celebrities like Bianca Beets and Snowbird Brown.

Hayden's father had an immoral past. Will was convicted with numerous criminal activities, including several sexual charges. On April 7, 2017, Hayden was sentenced on two counts of aggravated rape and one count of forcible rape.

Hayden was sentenced to double life sentences plus 40 years in prison to be served consecutively for the rape of two girls between the ages of eleven and thirteen. The show was put off after he was prosecuted.

In addition to that, according to TMZ, Stephanie and Kris were arrested by the police for child assault. Kris bruised the nine-year-old son of Hayden with a belt. Hayden, on the other hand, did not stop Kris from hitting a child despite being in the same room.

Stephanie has earned a hefty amount from her televised reality show on the Discovery Channel. Her current net worth is estimated to be over $500,000. Moreover, her work for the reality show has paid her furthermore $150,000 per episode.

Likewise, her father Will Hayden has a net worth of over $1.75 million. Stephanie's husband, Kris Ford, also has a sumptuous earning.