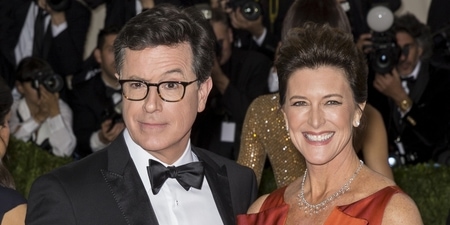 Stephen Colbert is a man with many talents. Be it engaging his audience and guests through his late-night talk show or his political prowess; he's got it all. The Emmy Award-winning host, just like Conan O'Brien is in a married relation for almost two decades now. In his long TV career, Colbert has impressed many with his charms.

The vibrant host interviewed all the celebrities you can name from Kumail Nanjiani to Rap God Eminem. It looks like Stephen is achieving all of this by himself, but that's entirely not true. His wife, Evelyn McGee, has his back on every step of his life. Do you want to know more about their romantic love life? If yes, then read along.

Destiny Played its' part in the Pairs' Meeting

The story of how the love birds met each other is quite a fateful one. Stephen faced some relationship crisis with his ex-girlfriend at the time. His former lover wanted to get married, and Colbert, on the other hand, was very confused.

The talk show host decided to take a trip to Charleston, South Carolina, to his hometown. He talked with his mother about the situation, and it helped him to clear his head. Colbert broke-up with his then-girlfriend and not get married at the time. This is where destiny played its' role to get Evelyn McGee and Stephen together.

He accompanied his mom to Spoleto Festival, and probably that was the best decision he ever took. The talk show host met the love of his life, and right then, he decided to marry her. In an interview, Colbert reveals that it was love at first sight.

They knew each other from Childhood

Stephen and Evelyn stood across each other in the hallway during the festival. Colbert then made his move, and after some conversation, they realized they had known each other since childhood.

In an interview, Colbert shares,

"We realized we had grown up with each other, but hadn't gone to the same school. She'd gone to the all-girls school and I'd gone to, essentially, the all-boys school".

In addition to that, Stephen said that they were a little embarrassed. What if, their friends found out about this. The luck was on Colbert's' side that night as he impressed Evelyn, and this is how the pair started dating each other.

After dating each other for three years, it was time for commitment for Stephen. Unlike his previous relationship, Colbert wanted to get married this time. He and Evelyn walked down the aisle on October 9, 1993, in a private ceremony.

This was the start of a profound marital life for the couple. As of now, the pair has set a new record for all the other couples in Hollywood by celebrating their twenty-sixth marriage anniversary. Evelyn chose to be a stay-at-home mother, but she has appeared in some skit with Stephen.

During the comedy skit "Strangers with Candy," Evelyn played the role of Stephen's mother. In addition to that, she also featured in the cameo role in The Hobbit: The Desolation of Smaug in 2013.

Just a couple of years after their bridal ceremony, Evelyn became pregnant with the duos' first child. She gave birth to their only daughter, Madeleine Colbert, in 1995.

The blissful moment in the pairs' life repeated in 1998 when Evelyn gave birth to Peter Colbert. Similarly, in 2002, the duo welcomed their youngest child, John Colbert. After so many years of raising his three kids, Colbert has somewhat become an expert in parenting.

In an interview, he talked about the best part of being a parent is coming home and having a conversation with your children. It is the most beautiful part because of its' simplicity in keeping the relationship intact. In the coming years, the pair is going to set new standards in their marital relationship for the new couples' to follow.