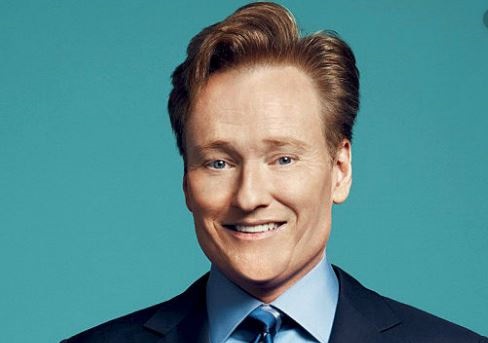 This next personality is a man of many talents. He has been in the TV business for more than 2 decades. If you are day to day fan of the late-night show, then you're in the right place. Conan O'Brien is an American television host, producer, podcaster, comedian, and writer. Since 2010, he has been hosting different late-night talk shows.

Conan was born on 18th April 1963 in Brookline, Massachusetts, U.S. He is raised by an Irish Catholic family and is serving as president of the Harvard Lampoon.

Conan met his love life Elizabeth Ann 'Liza' Powel back in 2000. It all started after she appeared on his show Late Night with Conan O'Brien to advertise a skit for Foote, Cone, and Belding. She worked as a senior copywriter for the company. It was love at first sight from both sides. The couple started dating and were seen sharing love in various public places.

The paired dated for almost 2 years and tied the wedding knot in 2002 in Liza's hometown of Seattle. Their almost two-decades-long nuptial relationships lead them to share two children. The pair's daughter Neve O'Brien was born in 2003, and son Beckett O'Brien was born in 2005. Having a busy lifestyle, the pair are still pampering their kids in every possible manner.

Furthermore, they are often seen traveling around the world in their holidays with their kids having fun and sharing the love. The family of four seems very happy and supportive of each other.

Who is Conan's wife Liza Powel?

After being bound in a romantic relationship with the Conan, Liza has been one of the public figures. Not to underestimate her with his husband's fame, she is one of the hardworking personality. Liza was born in Bainbridge Island, Washington, on 12th November 1970.

Due to her strict privacy policy, she has revealed so much about her. She was raised by her guitarist father, who has been playing guitar for more than 20 years. His father plays with his band for the Dixieland band and plays at New Orleans Creole Restaurant every Monday. Apart from all of this, she has a Master's degree in fine arts.

During her career, she has been engaged in various works and has been experienced many kinds of ups and downs. Furthermore, Conan has described her as incredibly intelligent, beautiful, and a good person. During Conan's hard time, she has been one of the massive supportive people to him.

She keeps him too busy so that he will not get any stress and depression by letting him engaging in other activities like cooking dinner, dropping the kids to school, and volunteering for some spots. Wow, is it great? Hats up to her deeds. As for now, Conan is still ruling the show-business with his outstanding sense of humor and comedic character.

Past Affairs and other Relationship

Conan has been one of the incredibly talented personalities in the show business. During his career, he has been attached name with various personalities, which include Lynn Kaplan.

The pair were seen in various places hanging around and having fun. However, the pair never spoke about their relationship. Some of the rumors have stated that they dated for almost 5 years but who knows they were dating or not or just having fun?

According to Lisa, Conan has a huge impact regarding her career and often speaks greats things about him. However, the star of Friends(American sitcom series) is married to Michael Stern and has 1 child.

The Net Worth of Conan O'Brien. How rich is He?

Conan has an estimated net worth of $85 Million, which makes him the richest active TV host in the world. Besides other top hosts like Stephen Colbert, Jimmy Kimmel and Chelsea Handler have a net worth of $45 Million, $35 Million, and $35 Million respectively.

His fresh, clever, and successful production company has to lead him to gain massive fame and name equally. Late Night Show with Conan O'Brien has been a huge brand in the industry. He makes $12 Million a year on TBS which also make him one of the highest-paid TV host. Alongside his huge income he has a massive fan following. In his Twitter account, he has a fan following more than 28.6 Million, and his Instagram account has a fan following 1.5 Million.

Houses, Cars and other property

Conan has multiple houses in the U.S. One of the houses which are located near to the Westerly Shore is valued at $723,000 where his parents live. The interesting thing about the house is the almost failed to pay an $8,000 tax bill of the house and saved from being auctioned off.

Another house that he paid around $20 Million is Pacific Palisades house back in 2011. The previous owner of that house is Ed Glazer, who is one of the sons of a famous personality, Malcolm Glazer (the owner of the Premier League giants Manchester United and NFL's well-known franchise Tampa Bay Buccaneers). Malcolm has an estimated net worth $4 Billion.

Alongside houses around the country, he has a massive interest in the cars which includes 1992 Ford Taurus SHO, BMW i8, and many more cars in which market price is extravagant.

The net worth of wife Liza Powel

Liza has an estimated net worth of $1 Million. She has accumulated this decent fortune from her career as a Promotion executive. She appeared on in her husband's show back in 2000. She also has appeared in 60 Minutes SXSW Flashback and Conan O'Brien May's Quit.

Being a remarkable talent, Conan has secure many awards and nominations throughout his career. Currently, he has been nominated for the title of Outstanding Interactive Program and Outstanding Creative Achievement in Interactive Media within an Unscripted Program.

During his career, he has won overall 11 awards and 66 nominations within the various titles. Talking about his winning awards includes 1 People's Choice Awards, 4 Primetime Emmy Awards, and 6 Writers Guild of America Awards. Looking throughout his magnificent career, he has been one of the inspiring personalities for many young generations.

Looking through his face structure, it is sure that he was raised by the Irish parents. Conan's mother, Ruth O'Brien is a former partner at the Boston firm Ropes & Gray and is also a retired attorney.

While his father Thomas Francis O'Brien is an epidemiologist, physician and is also a professor at Harvard Medical School. He grew up alongside his two sisters and three brothers. He graduated as valedictorian from Brookline High School and later studied at Harvard University.

Having massive stardom with his impressive career, Conan's likely interest is in music. Briefing about his early days, he used to serve as the drummer in a band called The Bad Clams. His playing attitude during on and off-screen surely proves that he is a great music lover.

In his show Late Night with Conan, he has interviewed many personalities from various fields. On that note, he once played guitar alongside guitar god Slash and musician Jack Black.

Team Coco and Conan O'Brien have been one of the best duos for the rise of Conan. The Team Coco is massive feedback for the Leading TV Host; His almost every task is handled by Team Coco, which includes ads, merchandise, endorsement, setup, and many more. Additionally, Jimmy Vivino and the Basic Cable Band are serving as a house band for Conan's late-night show since 2010, whereas Andy Richter served as the role of Sidekick on Conan's show.

Furthermore, all of this outstanding credit also goes to his assistant Sona Movsesian who has been head to head with him. Sona has been working as an assistant to Conan for almost a decade. She also has appeared in around 17 episodes in Conan TV show and seven episodes of The Tonight Show with O'Brien.

In August 2018, she tied the knot with Artak. Once, on the late-night show, she impressively managed the show after Kumail Nanjiani left the show only 30 minutes before the episode was set.