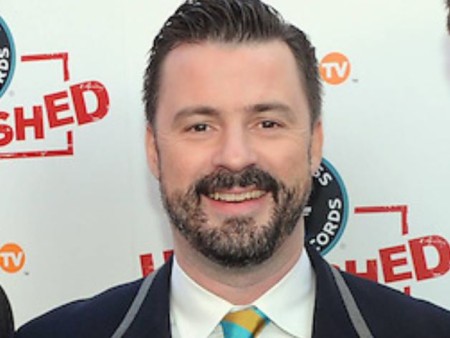 Isn't it amazing when you instantly appear on limelight without doing any hard work? Well, to be fair, being a celebrity partner isn't easy as there will be constant attention from media and the public. However, Anne Burrell and her fiance, Stuart Claxton are enjoying their relationship in an extravagant manner. Stuart himself worked as the marketing director and spokesperson for the Guinness World Records.

Anne is a popular chef and television personality best known as the host of Secrets of a Restaurant Chef and co-host of Worst Cooks in America. And Stuart is her loving partner who has now become a household name. So, when will they marry? Is everything fine with their relationship? Let's know in detail.

The 49-year-old sales advertising manager first met Anne through a dating site called Bumble in 2018. After dating for two years, Claxton intended to pop the question in early 2020, but the Covid-19 pandemic somehow discouraged him.

Nevertheless, Claxton utilized the quarantine time and did the right thing. He asked the love of his life to marry him. Amid the coronavirus pandemic, Claxton was living with Burrell in her hometown of Cazenovia, New York.

The couple were accompanied by Burrell's mom and Claxton's 15-year-old son. However, in April 2020, Stuart planned a romantic dinner date with the help of Burrell's mom. After dinner, he got down on one knee and pulled out the ring. Burrell shared the news of her engagement via Instagram on April 22, 2020.

As obvious, Anne said yes, and the couple is soon going to be husband and wife. Meanwhile, they are waiting for a proper date for their wedding ceremony. Anne is a step-mother to Claxton's teenager son, Javier.

Anne Burrell is a Bisexual

It is known that the celebrity chef has never kept her sexual orientation a secret. Burrell identifies herself as a bisexual and had previously dated women. She was previously engaged to award-winning chef, Koren Grieveson. Further, Anne publicly tweeted her engagement in 2012.

As per sources, Anne and Koren were about to marry, but they separated without disclosing the reason. Likewise, Claxton was previously married. If everything goes right, he will be Anne's first husband.

The celebrity partner, Stuart Claxton worked foe Guinness World Records for ten years. Also, he has made appearances in many television shows. The average salary for sales marketer is over $53,212 per year. Therefore, Claxton might have collected a decent sum of money from his professional career. However, the exact information about his net worth is unknown.

On the other hand, Stuart's fiancee, Anne Burrell has a net worth of $5 million as per celebritynetworth. She is a television personality, just like Bon Appetit's chef, Chris Morocco. Anne currently hosts Food Network's show, Secrets of a Restaurant Chef and co-hosts, Worst Cooks in America.

Further, Anne was one of Mario Batali's sous chef in the Iron Chef America series. She was also an instructor at the Institute of Culinary Education. Few of her memorable television appearances include The Next Iron Chef, Chopped All-Stars Tournament, etc.