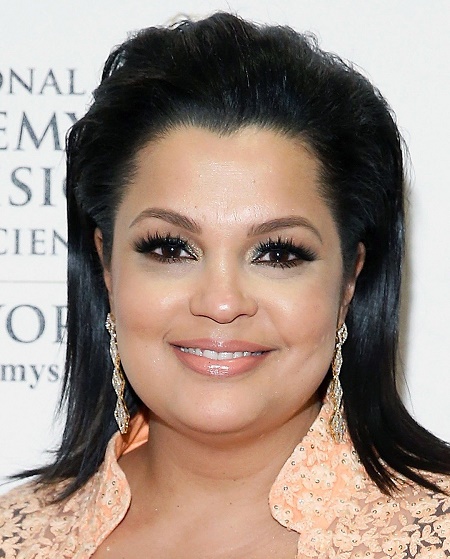 Sukanya Krishnan is a six-time winner of the Emmy Awards TV host who has established herself as a well-known broadcasting journalist. She has worked for several TV channels shows such as Good Day Wake Up, Good Day New York on Fox 5 NY WNYW,  PIX Morning News on WPIX, and TV show Home Delivery.

She was born on August 19, 1971, in Chennai, India but grew up on Staten Island. As per her citizenship, she is American and belongs to Asian ethnicity. She attended New Dorp High School for her schooling and graduated from Dickinson College with a bachelor's degree in Spanish.

As of now, the 48 years old news anchor has been living a blissful and strong marital relationship along with her husband, Eric Schroeder. Just like her, Eric is a non-show-biz personality who works with the New York Fire Department (FDNYT) as a Caption since 30th May 2013.

According to online sources, Sukanya met her boyfriend Schroeder through a mutual friend while working for the American biweekly magazine called New York Magazine in the early 2000s. Then, the two soon began dating and dedicated themselves to taking their relationship into the next step after a few years of love romance.

Finally,  the lover became a life partner when they tied the knot at a private wedding ceremony on September 17, 2007. Their big day was held in the presence of their loved ones.  The TV reporter also announced her marriage to Eric on 17 September 2007 on the CW11 Morning News. Since the day, the couple has been together for over a decade with no divorce speculation since the day.

Mother of Two, Kiran, and Shyla

Yes, the 5 ft 9 inch tall TV host has two beautiful children from her marriage with her husband, Eric. Two years later, the duo welcomed their firstborn child or son Kiran Schroeder on July 22, 2009.

After giving birth to her son Kiran, Sukanya returned to the Morning News on October 12, 2009. After four years of firstborn, they gave birth to a daughter, Shyla Alexy Schroeder, on May 31, 2013. Now, the family of four lives in Westchester County, New York together.

Sukanya Krishnan, working in the broadcasting sector for a few years, earns an impressive amount of fortune. Her actual net worth and property details are still under investigation as of early 2020, although some reports estimated it is around $3 million. Her hosting career as a news anchor is the main source of her revenue.

To date, Sukanya has served many famous television channels and broadcasting companies so she receives an impressive amount for herself. From 4:30 am-7 am she worked as one of Good Day Wake Up's morning anchors alongside Jennifer Lahmers.

\So her compensation might fall between $62,000 and $100,000 annually. But, for her own personal reason, she suddenly quit the Good Day Wake Up show during the first week of August 2019. Therefore she lives a luxurious lifestyle with such enormous earnings.