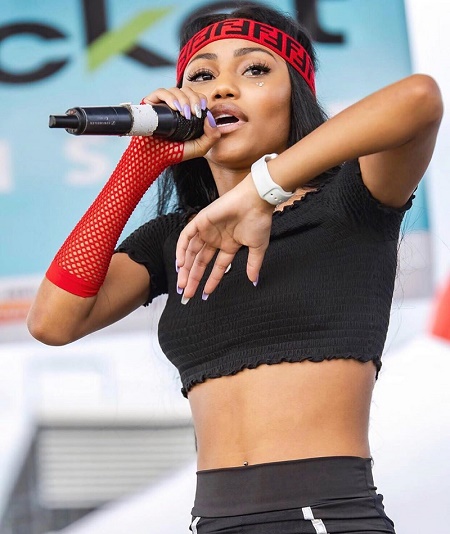 Supa Peach is an American multitalented Musical artist, YouTuber, reality TV star and entertainer who initially got fame through YouTube and other social media outlets. In addition to that, she starred on American reality television series, The Rap Game, which was premiered on January 1, 2016, on Lifetime.

Peach Hernandez was born on March 7, 2003, in the British Virgin Islands but moved to Puerto Rico with her family. Her mother’s name is Josetta and QMBankroll (IG Username) is her father. Further, she has one brother NyNy and one sister Precious Peach who serves as Supa's manager. As per her citizenship, she is American and belongs to the African-American ethnicity.

Is Peach in a Relationship Currently? Who is her Boyfriend?

The 27-year-old media personality doesn't seem to be engaged in any type of love affair as of now. She still keeps much of her personal stuff in a mystery or away from the limelight. There is also no precise details as to whether she has a boyfriend or not.

The musical artist Supa is really very busy with her job at the moment and is more serious about it. She is reported to be a single today and loves her individuality. So far, there is no further information available about her past love relationship with the media.

Net Worth and Income Source

As of early June 2020, Supa Peach has an estimated net worth of $500,000. Her most of her incomes come from her multiple career as a singer, rapper, musical artist, and social media personality. Similarly, artists like Suigeneris and Lebraa Deville also making a good amount of money throughout their own profession.

Today, Peach has an impressive fan-following on her Instagram account with 1.9 million followers. Thus, she is making a decent amount by sharing supported content, brand endorsements, paid content, etc. She also has 473K subscribers on her YouTube channel, with 77,765,005 video views. As per the social blade, her monthly earnings are estimated at $68 to $1.1 K.

Additionally, she's making an extra amount by hosting parties including birthday parties and other more events.

She is a YouTube Star and an Aspiring Rapper

The 5 ft 0 in tall Supa is popular as the social media personality. She initially launched her own YouTube channel on July 6, 2012. Since then, she has been uploading her music videos, dancing, as a singer, rapper, and model. Also today, she performs at various concerts.

Likewise, her first video is Supa Peach – Live Performance at SOUTH CAROLINA that was released on July 08, 2012. While her first music video is the Numero Uno song. In August 2016, she released her single "Pretty Gang," and also on August 12, 2018, debut studio album VII S.O.S.

To date, Peach has released various songs like Cartier vision, Numero Uno, Wheeler, Checkmate, Trolls, Runit, Jump, and among others.

Besides it, she was also noticed by a famous producer and Grammy holder James Worthy as a social media star. He invited her and four other fresh-faced rappers to take part in the "The Rap Game" contest show, which aired on Lifetime.

The musical artist further appeared in the movie Groove Lane in 2018.