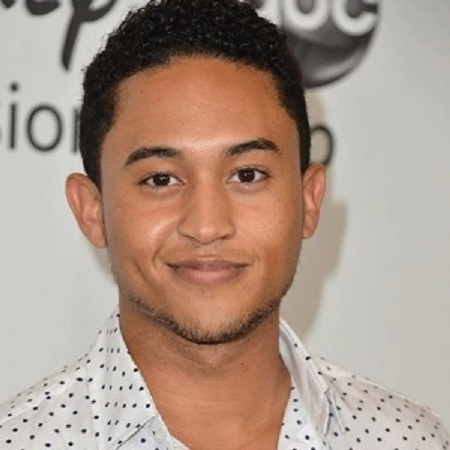 Tahj Mowry is an American actor and singer who is best known for his performance as T.J. Henderson, on the sitcom Smart Guy from 1997–99. His other hits shows include Baby Daddy (2012–17),Kim Possible (2002–07), and Full House (1991–95). Further, he is also famous as the little brother of identical twins Tia Mowry and Tamera Mowry, who are both actresses.

Tahj Dayton Mowry was born on May 17, 1986, in Honolulu, Hawaii, United States. His dad, Timonthy John Mowry is a former US Army and mother Darlene Renée Flowers is a housewife. He has three siblings twins sisters Tia and Tamera Mowry and a brother Tavior. For his education, he attended Westlake High School, Welby Way Elementary School, Pepperdine University, and Savannah State University.

Thirty-Four years old actor Tahj is reportdely unmarried as of now. And at the current moment, he has not openly disclosed whether he is dating anyone or not. So, his current relationship status is marked as a single.

However, Mowry had been in a relationship with his late girlfriend, Naya Rivera. She was an American actress, singer, and model. They became a couple in 2003 after meeting for the first time on the set of Smart Guy in the 1990s. But they ended their relation in 2007 after being together for four years.

Following his breakup with Naya, the 1.68 m tall star began dating his new girlfriend, Erica Campo in 2013. She is a model, actress, and makeup artist. But they had separated in 2015 after two years of love romance.

Yes, you have read correctly. His former lover or beloved actress, Rivera passed away on July 8, 2020, due to accidental drowning. She was just 33 years old. She was buried on July 24, 2020, Forest Lawn, Los Angeles, California.

After her death, Mowry shared a deep tribute by posting their teenager photo of two on his Instagram account with the caption: 'You will forever be my all-time favorite dance partner'. Also, he shared another snap of Josey Hollis Dorsey's mom Naya with his arms wrapped around her waist where he said that: "rest in power and peace Naya Marie...⁣".

How Much Net Worth Is Tahj Mowry?

As of early 2020, Tahj Mowry has an impressive net worth of $2 Million. He credits his earnings to his own successful two decades of a career as an actor and singer. Likewise, he made his TV debut by ABC's show Who's the Boss? in 1990.

Well, Mowry came to fame when he joined the regular cast member in the popular sitcom, Smart Guy by playing the role of H.J. Henderson. In the show, Nathan West, and Kenya Moore also starred. Thus, for his acting performances, he must be receiving a salary of about $52,000 a year.

Asides acting, he is also quite busy with his music career. He released his debut single entitled Flirt in April 2015 produced by Excel Beats. On August 4, 2015, he released a six-song EP named, Future Funk. The EP featured Bossy, Alone Dancing, and End of the Road.

In 2009, Tahj featured Single titled Kick It Out with Boom Boom Satellites and Flo Rida. He also performed on the 2002 Christmas complication album Shine Your Light on Me, the School's Out! Christmas. Singers Myra and Ashlee Simpson have both appeared in the 20 track compilation.

On the other, his older sisters, Tia and Tamera Mowry share the total net value of $8 million. The twins' sisters have earned their worth through their acting gigs.