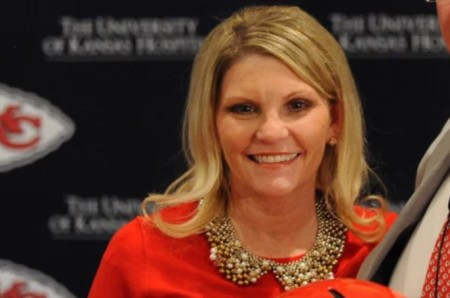 Andy Reid is one of the most celebrated football coaches in NFL history. He is currently the head coach of Kansas City Cheifs. From 1999 to 2012, Andy served as the head coach of the Philadelphia Eagles. Throughout his successful career, one person never left his side and that is his longtime wife, Tammy Reid.

Besides being a celebrity wife, Tammy is a mother, volunteer, and philanthropist. She was born in 1960 in the United States. Born to a family of devout Mormons, Tammy has been active in the Latter-day Saints since her youth. Further, she completed her studies at Brigham Young University.

The 60-year-old Tammy Reid is a longtime wife of football head coach, Andy Reid. The couple first met while studying at Brigham Young University in the early ’80s. After a year of dating, Tammy and Andy exchanged their wedding vows on August 8, 1981.

Andy had to move a lot due to his profession and Tammy never got tired of following him. She did an excellent job of raising five kids. However, she was not only a housewife as Tammy did a lot of volunteer works and charity in her community.

The secret to Long Lasting Marriage

We hear couples arguing about small things and breaking up in a short period. However, Andy and his wife maintained their relationship for nearly four decades. To this date, the spouses has never been in any controversy except for once where their sons were arrested. We will discuss that later.

As mentioned, Tammy's parents were devout Mormons, while her husband grew up not being a religious man. However, after meeting Tammy, Andy converted and became a member of The Church of Jesus Christ of Latter-day Saints. In an interview, the coach said:

“I’ve been with her for about 40 years now. Every day is a special day. I’m telling ya. I call her my girlfriend for that reason. You never lose interest if you do that, right, you guys out there? Call them your girlfriend and you always do special things for them.”

The secret to Andy and Tammy's unbreakable marriage is their mutual respect and love for each other. Likewise, the head coach for the Washington Football team, Ron Rivera is married to Stephanie Rivera since 1984.

As Andy was mostly busy at his coaching, Tammy raised five children; three sons, Garrett, Britt, and Spencer, along with two daughters Drew Ann and Crosby Reid. The oldest child of the Reid couple, Garrett died from an accidental heroin overdose on August 5, 2012.

Like his brother, Britt also had a problem with drug addiction. However, he made an effort to turn his life around after his troubled past. Britt has been a member of Andy’s coaching staff ever since. He now serves as Kansas' linebackers and outside linebackers coach.

There is no exact information available about Tammy's net worth. She is mostly active on social works and church groups working with young women. On the other hand, her spouse has stunning wealth. Andy Reid as a football head coach has amassed a net worth of $25 million as per celebrity net worth.

Further, Reid's annual salary is $7.5 million. In 2017, he signed a five-year contract with the Chiefs which could be worth over $40 million. The deal made him the fifth highest-paid coach in the league. Hence, there is no doubt that the Reid couple lives a luxurious lifestyle.

Woman with a Golden Heart

Most people might not know but Tammy is a role model for young women in her community. Back when Andy was the head coach of Philadelphia Eagles from 1999-2012, Tammy was the leading social activist. Like Reid, a young woman named, Michaela Cuomo also works for the societal cause.

In 2000, Tammy adopted a domestic violence charity named, Laurel House. She became the public face of the charity organization. Further, Reid went on to speaking with Rotary clubs, church and youth groups, women's organizations, and chambers of commerce.