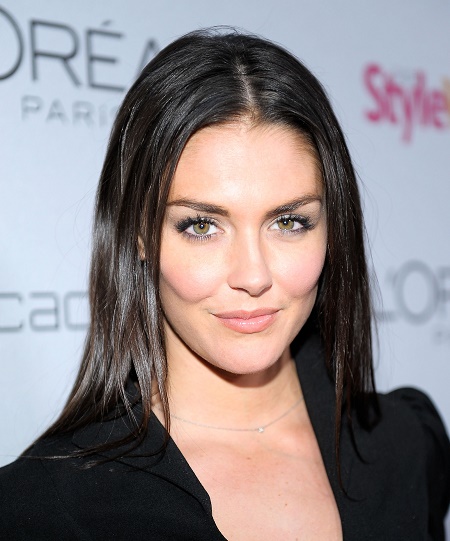 Taylor Cole is an American actress and former model who began her modeling career in her teens. She made her first film appearance as an actress in 2004 with Erika Spalding 's character in American TV drama, Summerland. Over the years, she has also starred in the hit TV series like NCIS, Castle, and Two and a Half Men.

She was born in Arlington, Tarrant County, Texas, on 29 April 1984. Her mother's name is Deborah Quinn and actor Shawn Christian is her stepfather. She also has one half maternal brother named Kamer Christian. She is American by citizenship and is of white origin.

Aged 36, Taylor who studied at the Mirabeau B. Lamar High School, now shares a blissful married life with her partner, Kevin Simshauser. He is a model and a real estate investor with Levinson Investments.

For her big day, the bride donned a Jenny Packham wedding gown with beaded sleeves on her and pulled her blonde hair into a sleek updo. While her co-stars from Laguna Beach, Morgan Souders and Alex Murrel, who acted as bridesmaids, wore maxi robes and floral crowns

There aren't words to describe the most incredible weekend of our lives," the new wife of Simshauser captioned on her Instagram post. " We are so full of love, smiles, and amazing memories. I am one happy WIFE! #palmsimswedding."

The former reality star, announced the birth of her firstborn child on Friday, September 28, 2018, nearly 3 years of marriage. The couple named their newly born daughter Tatum Woods who is now 1 and a half years.

The new parents, Cole and Kevin shared their photos of their bundle of joy on their social media respectively. "The most surreal, intense, amazing thing I've ever witnessed was watching my daughter's birth," the real estate broker captioned.

While, that same day, the actress wrote on her Instagram post. "Our baby girl, Tatum Woods is here'. Just three months ago before welcoming a Tatum, she and her co-stars Alex celebrated their baby shower together.

Past Love Affair of Cole

The Arizona-based photographer was rumored to dating to the actor, Ryan Kwanten,  43, her co-star from the TV series, Summerland. After dating for nearly two years from 2006-2008, the exes split.

The 174 cm tall alum also had a love affair with singer and actor Jesse McCartney, who is now 33 years. In addition, Taylor who is graduated from the University of Arizona also had encountered actor Josh Henderson, from 2008 to September 2009.

The Net Worth of Taylor Cole

As an actress and model, Taylor Cole has made a suitable amount of fortune. As of early May 2020, she has estimated $1.3 million net worth. Similarly, she reportedly earns between $46,955 and $69,571, which is America's average actress salary.which is the average salary of America actress.

Besides TV career, Cole also makes an incredible amount from her sponsorship deals and TV ads such as Old Spice Deodorant, Dooney & Bourke, and Crest Toothpaste, in addition to a television career. In addition, she uses her social media activity to support brands and items like the Koko Collection.