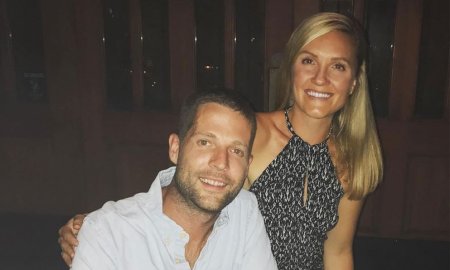 Nothing can compare while you were finding true love because once you fall in love, your heart will be complete with full of happiness and joy. Just like the way of searching romance, the married couple, Kevin Simshauser and Taylor Cole find they are made for each other after meeting for the first time.

The beautiful couple is enjoying the most precious moment of their lives while playing golf, skiing over the snowy mountains, and going on vacations during holidays. Let's take a glimpse of the pair's married life below.

The 35-year-old actress, Taylor Cole and Kevin Simshauser, businessman united as husband and wife on 2nd October 2015 at the La Quinta Resort The Waldorf Astoria resort and club in La Quinta, CA. At the time of the wedding, Taylor invited her Laguna Beach co-actors, where Alex Murrel and Morgan Souders became bridesmaids.

The bridal was looking stunning at the time of nuptial, where Cole wore Jenny Packham's beaded wedding gown. More to this, her bridesmaids were donned in maxi dresses, wearing floral crowns.

On the other side, the groom, Simshauser was dressed in a dark blue slim fit tuxedo, a white undershirt tied up with a dark blue tie and a white flower on his left pocket. At the end of their ceremony, two of their wedding guests put them in their shoulders and started dancing.

The night for the bridegroom became an unforgettable moment in their life. Following their wedding ceremony, the pair celebrates their marriage anniversary every year on the 2nd day of October.

Before their marriage, Taylor was linked into a short relationship with Kristin Cavallari's ex-boyfriend, Talan Torriero in 2005. When they were in the affair, Cole and Kristin became frenemies, but their rivalry ended after Taylor broke up with Talan.

Taylor and Kevin are blessed with an adorable child, Tatum Woods on 21st September 2018 at a hospital located in the Arizona area. After the birth of their baby, the real estate investor posted a Instagram, saying,

"Watching the birth of my daughter was the most surreal, intense, amazing thing I have ever witnessed, So proud of you and your mama! Happy Birthday, Tatum Woods!"

Upto this, the couple is busy on the care of their 2-year-old baby girl. Similarly, Jack Fincham and Casey Ranger are also co-parenting their newly born child, Blossom Fincham.