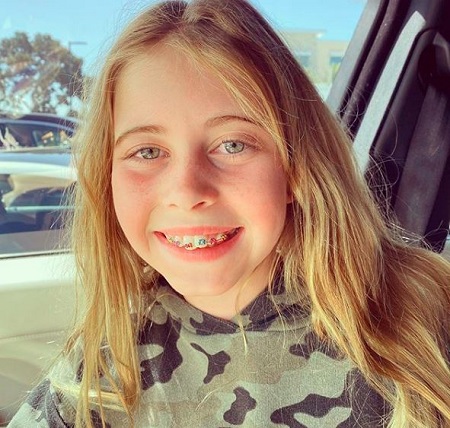 Taylor El Moussa is recognized as the firstborn child or single daughter of Christina Anstead and Tarek El Moussa. Together, they starred on HGTV's show Flip or Flop and also ran real-estate agency Tarek and Christina: The El Moussa Group in Orange County, CA. Now, Christina runs her own HGTV show named Christina on the Coast since 2018.

The celebrity kid Taylor was born on 22nd September 2010 in California, United States of America. She has one younger brother Brayden EI Moussa, born on August 17, 2015, and has half younger brother Hudson London Anstead, born on September 6, 2019.. Her aunties are Carly Haack and Angelique. As per her citizenship, she is American and belongs to the white ethnicity.

Taylor's Parents (Christina and Tarek) Were Together From 2009–2018

Yes, Taylor's mom Christina and Tarek are no more together. 37, Christina and 39, Tarek El were married in 2009 at an intimate ceremony. One year later, Taylor was welcomed.

Then, Tarek suffered from thyroid and testicular cancer, so they decided to bank his sperm and try in vitro fertilization. But the process was failed, and then she was suffered from a miscarriage on the second try. Surprisingly, Chrirsuina became pregnant with their son in 2015.

Unfortunately, in May 2016, Tarek and Christina announced their split after an incident at their Southern California home. Tarek fled from a home after an argument and was reportedly suicidal. But sources alleged he was never suicidal and simply went for a hike with a gun to protect himself from wild animals.

In January 2017, they filed for divorce. Following their seperation, the future of their show and their co-owned real estate agency "The El Moussa Group" was uncertain. Their divorce was finalized in January 2018. However, the two stills continue co-parentings together.

She Has A Step Dad, Ant Anstead

Her mom, Christina El Moussa, the 1.63 m tall, tied the knot again. The co-host of Flip or Flop walked down the aisle with an English television presenter, Ant Anstead. But just like Christina, aged 49, Ant was married to his first wife, Louise Anstead, with whom he has two kids, Archie Anstead, 12, and Amelie Anstead, 15.

They celebrated their romantic wedding on 22nd December 2018 at their home in Newport Beach, California. The winter wonderland wedding was held privately among 70 of their closest friends and family. The groom wore a grey suit whereas the bride stunned a lovely white custom long gown.

Gracefully, the couple's four kids also attended their parents' special day. Soon after tying the knot with Ant, Christina officially changed her surname from El Moussa to Anstead. After one year of marriage, the lovebirds welcomed their son Hudson London Anstead, born on September 6, 2019.

Her Dad, Tarek Got Engaged

The TV personality, Tarek El has found a new love in his life. Now, he is reportedly dating American actress and model, Heather Rae Young since July 2019. They were first spotted kissing and cuddling on a yacht at the Portofino Hotel & Marina in Redondo Beach, California, on 29 July.

Now, after one year of love romance, the pair became an engaged couple on July 26, 2020. Tarek popped the question his girlfriend Heather on Saturday night on a boat trip to Catalina Island, California while they were celebrating their one-year anniversary.

Aged 9, Taylor El Moussa has not involved in any professional works at the current moment. So, she enjoys her parent's substantial assets. When it comes to her father, Tarek Moussa's total worth, it is around $10 million. He has gained his fortune through his own career as a real estate agent and reality TV personality.

Whereas her mother, Christina Anstead has a whopping net worth of $12 million as of 2020. She has accumulated a substantial amount of fortune for herself working as a real estate investor and television personality.

Similarly, her salary is estimated at $50,000 per episode of Christina on the Coast. Further, Christina and Tarek sold their property in Santa Ana, CA for a profit of $34,000 in 2010 with their business partner Pete De Best. Also, they paid a fairly paltry $10,000 per episode in the show Flip or Flop.