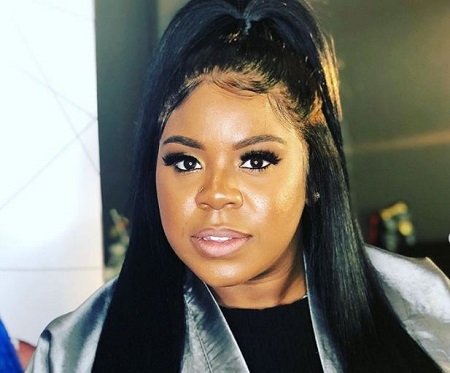 Part of being celebrity kids is that you really need to be out there and getting notoriety and attention. And in the same case, Tia Mann has already received people's attention due to her famous parents since her birth time.

She is known as the youngest or single daughter of David Mann and his wife, Tamela Mann. Well, David is a well-known stand-up comedian while Tamela is a gospel artist. Now, Tia works as a solo singer and makeup entrepreneur.

Is Tia Mann in a Conjual Relationship?

Well, the answer is no. Mann who is 30 years old has not tied the wedding knot with anyone. But she is enjoying a happy love life with her boyfriend whose name is Justin Pearson.

They first met each other in around 2017. Pearson worked for Tia's parents, David and Tamela, supplying LED screens and lights on their upcoming tour. Just right after their first meeting, he found out she was interested in him.

It took a couple of more months to get to know each other, However, their relationship grew after travelling and working together. At a Q&A session on their YouTube channel, they remembered that their first date was at a restaurant named Cicis 'Pizza.

Justin also revealed he has a teenage daughter in the same Q&A and doesn't want more kids in the future. Similarly, the happy pair have announced that in the future there will be wedding plans.

Parents' (David and Tamela) Been Married Over Three Decades

Yes, "It's a Manns' World former stars David and Tamela has been happily married for thirty-two years. They had their first met when as teens on a chorus class.

The two exchanged their wedding vows on 9 June 1988 in an intimate ceremony with the presence of their close friends and relatives. Back in spring 2013, Two-time NAACP Image Award-Winning Actor Mann and the Grammy Award-Winning Recording Artist Tamela renewed their 25 years wedding vows.

The duo shares two children David Jr. and Tia Mann from their marital relationship. With a relationship spanning more than three decades, the duo shares perfect life together and it's something fans admire about them.

Yes, after undergoing weight loss surgery in the year 2017, Tia Mann recently started to lose weight. And definitely, she has grown into a gorgeous young woman over the few past years.

But prior to the operation, she did not feel she was especially unhealthy and not beautiful. At that time, the beautiful celebrant said that she was looking forward to being much healthier and a little slimmer. Similarly, her planning process and the procedure were seen on' The Manns.

Now, she's on a diet and balancing her weight perfectly.

Working as a singer, YouTuber and businesswoman, Tia must be earning a good amount of money. Her net worth is estimated to be around $1 Million as of 2020. Now, she is highly active on her own makeup business brand named Tilly’s Cosmetics.

Further, Mann and her now-boyfriend Justin run their own Youtube channel under the name The J.P & Tia Show. It has around 19.2K subscribers so they must be gaining a good income.

Apart from her earnings, her father, David's luck is around $5 Million and her mother, Tamela's net worth is $4.5 Million. Without a doubt, she must be living a lavish lifestyle with her earnings and luck.

Tia was born on May 25, 1990, in Mansfield, Texas. She has an older brother David Mann Jr., born on November 7, 1988. Also, she has two half-siblings named Tiffany Mann, and Porcia Mann from her dad's other relationships.

Visit Marriedceleb and look into the life of your favourite Hollywood celebrities!