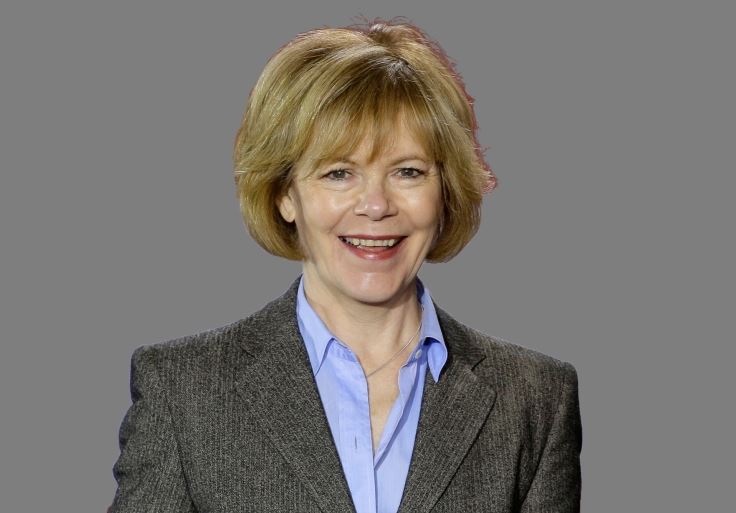 Tina Smith is an American politician who is serving as the junior United States senator from Minnesota since 2018. A former businesswoman, Smith also worked as the 48th lieutenant governor of Minnesota from 2015-2018. Smith is running for election for a full term in the U.S Senate and will face Republic nominee Jason Lewis in the November 2020 general election.

Christine Elizabeth "Tina" Flint Smith was born on March 4, 1958, in Albuquerque, New Mexico, U.S. She is 62 years old as of 2020. Her father, F, Harlan Flint, was a lawyer, while her mother, Christine, was a teacher. Tina graduated with a political science degree from Stanford University. She earned a Master's in Business Administration from Tuck School of Business at Dartmouth College.

Over 36 years of Married Life

Smith has been married to her longtime husband, Archie Smith, since 1984. The couple first met in September 1982 in the food line while they were attending Tuck School. Well, Tina was the first one to approach her future husband. Despite being together after so many years, Smith has the same love and respect for her partner's unconditional support and care.

Tina and her spouse, Archie, share two sons, named Sam and Mason Smith, who are both adults as of now. Talking about Archie, he is an investor who mainly focuses on medical industry stocks. He is a venture partner with SightLine and a former partner of Rothschild Capital Partners.

Tina and Archie are grandparents as both of their sons are married. Mason is married to his wife, Julia. The couple welcomed their first son, Ari Michael Smith in June 2020.

Senator Tina Smith has a net worth of at least $5 million as per mprnews. In 2018, her net worth was $1,696,020, while in 2017, her wealth was over $6 million. Further, in a full financial disclosure form, Smith revealed that her family has assets ranging from $5 million-$12 million.

Likewise, the Smith couple owns stocks in U.S. Bancorp and TCF Financial and highlights med-tech companies as well. They also have investments in several companies. Well, it is not unheard of senators having a huge fortune. Kelly Loeffler, for example, is currently the wealthiest member of the U.S Congress, who has a net worth of $500 million.

The Senators' jobs are one of the highest paying jobs in the United States, with an annual salary of $174,000. Also, some politicians make their fortunes from their outside private career. Similarly, Smith was a businesswoman before she entered politics.

As a U.S Senator

Smith began serving as the junior United States senator of Minnesota since January 3, 2018, alongside Doug Jones of Alabama. Currently, Smith is serving with Amy Klobuchar in the senate's office. Smith will face a republic nominee in the November 2020 general election.

Smith was a vice president of Planned Parenthood from 2003-2006 and supported legal abortion rights. In July 2020, she introduced the Substance Regulation and Safety Act to legalize cannabis. Besides, she also advocates for agriculture, climate change, health care, housing, LGBTQ, and immigration issues.