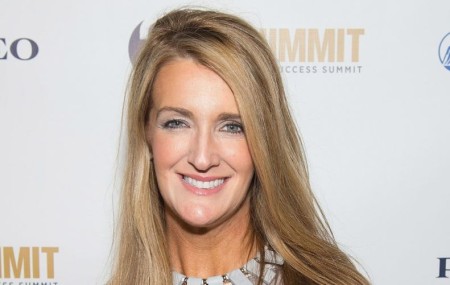 Kelly Loeffler is an American politician who became the junior United States Senator of Georgia in January 2020. A co-owner of the WNBA's team, Atlanta Dream, Kelly previously worked as the CEO of Bakkt, a subsidiary company of Intercontinental Exchange. She is a Republican and is running in the special Senate election, which will take place in late 2020.

Kelly Lynn Loeffler was born on November 27, 1970, in Bloomington, Illinois, the United States. Loeffler grew up in her family's grain farm in Stanford. She is the first in her family to graduate from college. Kelly earned a Bachelor of Science in marketing from the University of Illinois. Likewise, she received a MBA in international finance and marketing from DePaul University.

The 49-year-old, Loeffler, is a married woman. She exchanged her wedding vows with a businessman named Jeffrey Sprecher in 2004. For your information, Jeffrey is the founder, chairman, and CEO of Intercontinental Exchange. Additionally, he is the chairman and owner of the New York Stock Exchange. The couple first met while Kelly joined her husband's company in 2002.

Loeffler and her spouse, Sprecher has been married for nearly 16 years as of 2020. The additional information about their wedding ceremony is not available. Despite being married for so long, the husband-wife duo doesn't share any children. Another influential U.S senator, Elizabeth Warren, also has a joyful married life with her husband, Bruce H. Mann.

The 65-year-old, Jeffrey Craig Sprecher was born in Wisconsin. He earned a Bachelor's degree in chemical engineering from the University of Wisconsin-Madison in 1978. Likewise, he received a Master of Business Administration from Pepperdine University in 1984.

Kelly and Jeff both are influential people on their respective careers. Moreover, the couple is said to be Wall Street's star power. Kelly and Jeff also has been recognized for their leadership and community services.

In 2018, Big Brothers Big Sisters of Metro Atlanta named Kelly and Jeff as their 2018 Legacy Honorees for the example they set as leaders and mentors within the Atlanta community.

They are recipients of the National Monuments Foundation’s “Millennium Gate Prize”; James Magazine’s “Georgians of the Year”; and Georgia Trend’s “100 Most Influential Georgians”.

Do you know, Loeffler is currently the wealthiest member of the United States Congress? Kelly Loeffler has a net worth of $500 million as per a newspaper and website publication called Roll Call. However, Forbes estimates that Kelly and her husband, Jeff, could be worth more than $1 Billion.

Kelly, as the junior U.S senator, earns an annual salary of $174,000. So, how did she made a fortune of half a billion dollars? Well, the majority of her wealth is derived from her husband. As mentioned earlier, Jeff is chairman of the New York Stock Exchange.

Likewise, Jeff's net worth is $500 million as per celebrity net worth. As of 2020, he owns over 100,000 units of Intercontinental Exchange worth over $335 million. Similarly, he sold ICE stock worth over $195 million over the last seven years. As the chairman of ICE, he earns over $14 million per year.

In 2009, Jeff and Kelly purchased a15,000-square-foot mansion in Buckland, Atlanta, for $10.5 million. The purchase at that time was reported to be the most expensive home sale on record in the city. The European styled estate is called Descante is a luxurious mansion with a nineteenth-century pool house.

The couple has three $1 million-plus homes in Florida, a condo in Chicago, and a $4.3 million pad on the Georgia coastline. Therefore, Kelly and her spouse, without a doubt, live a lavish lifestyle.

Did Kelly and her husband violate Trading Laws?

As per the public release of federal financial disclosure on March 19, 2020, Kelly and her husband, Jeff sold stocks worth millions, which they owned in companies vulnerable to the COVID-19 pandemic.

On March 20, 2020, the consumer advocacy group, Common Cause, filed complaints against the couple for possible violations of the Stock Act and insider trading laws. On May 26, the Department of Justice stated that it had closed its inquiry into Loeffler.