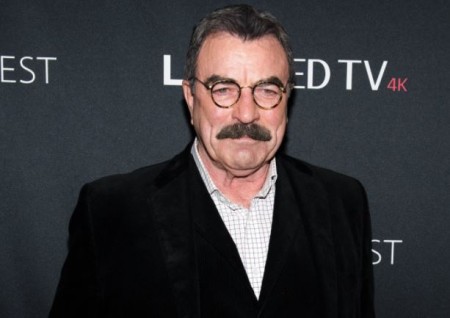 Actor Tom Selleck got his breakthrough role as private investigator Thomas Magnum in the tv series, Magnum, P.I. The 75-year-old, actor known for his macho looks and stunning personality has appeared in numerous films and tv shows. Since 2010, he has been portraying the character of Frank Reagan in the CBS tv series, Blue Bloods.

Selleck has been married twice in his life. His second and current wife is Jillie Joan Mack, an English actress, and dancer. The couple married on August 7, 1987, in a secret wedding ceremony.

Further, their marriage took place at a chapel in Lake Tahoe, Nevada. However, they wed under the aliases Tom Jenkins and Suzie Mark to avoid unnecessary media gossips.

After a year, the couple welcomed a daughter. Further, they bought a 65-acre ranch in Ventura County, California. Selleck scaled back on work to spend more time with his new wife and baby.

Despite the age gap of 13 years, Tom and his Jillie has crossed over 33 years of married life. Their only daughter, Hannah Margaret Selleck was born on December 16, 1988. Hannah is a passionate equestrian and an accomplished competitor at the Grand Prix level.

Selleck gained instant stardom with Magnum P.I. but he had trouble maintaining his personal life. The actor worked 90 hours a week which gave him less time to be near his wife and daughter. In an interview, Tom said: "I quit Magnum to have a family."

It was around 1983 when Selleck first saw his future wife on a musical Cats. He was mesmerized by Jillie's performance who played Rumpleteazer. After meeting backstage, Tom wanted to have a conversation but he couldn't do it. Later, he gained enough courage to asked her on a date.

The couple went for a dinner date and soon Jillie fell in love with the handsome actor. Once her contract for Cats was finished, Mack moved to Hawaii where Selleck was filming Magnum, P.I. Soon after, they began making public appearances together from the Emmys red carpet to his Hollywood Walk of Fame Induction in 1986.

When he met Jillie, Tom was a divorcee. His first wife was a model, Jacqueline Ray. They married in 1971 but divorced in 1982 after 11 years of marriage. Selleck first met Ray on the sets of Magnum P.I.

While they were married, Tom adopted Ray's son, Kevin Shepard (b: 1966) who is the former drummer for the American rock band, Tonic.

In 2014, Jacqueline made headlines after she hired a hitman to kill her son-in-law. She claimed her son-in-law, Leon Bauchum abused her daughter, Umeko Ray. Well, Jacqueline was sentenced to 18 years in prison. She will be released in 2032.

The former Magnum P.I. star, Tom Selleck has a net worth of $45 million as per celebrity net worth. One of the most recognizable faces of Hollywood, Selleck has worked in a variety of tv shows and films.

Watch a clip of Magnum P.I. theme, the show catapulted Selleck's fame to the international level!

Since 2010, Tom has been portraying the lead role of NYPD Police Commissioner Frank Reagan. As per reports, the actor charges $200,000 per episode which means he earns $5 million per season.

Selleck is mostly known for his work on television. However, his films has also collected excellent revenues at the Box-Office. The 1987 comedy film, Three Men and a Baby grossed $240 million against the production budget of $11 million.

Selleck's primary residence has been a 65-acre ranch in Ventura, California since 1988. He purchased the house for $5 million. The Spanish colonial-style ranch house has eight bedrooms plus staff accommodations.

Additionally, the luxurious estate includes stables, corrals, a tack room, a heliport, a swimming pool, an adjacent cabana, a tennis court, a three-hole putting course, and a practice green. Previously, he owned a 1,800 sqft apartment in Los Angeles.