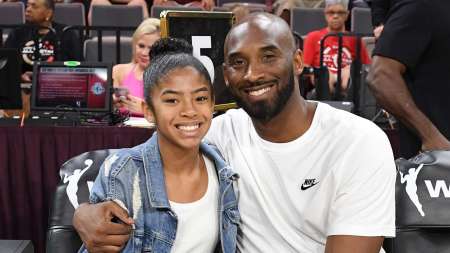 On Sunday, January 26, 2020, one Sikorsky S-76 helicopter on a hillside in Calabasas, California, in which nine people died who were on board. The tragic incident took the life of a NBA legend, Kobe Bryant, 41, and his 13-year-old daughter, Gianna Bryant.

Before the helicopter crash, Kobe and his daughter, Gianna were on their way to attend her AAU basketball game at an academy where he coached her team. Nevertheless, their destination encompasses an end, which was devastating.

After the demise of the five-time NBA champion, the commissioner of NBA, Adam Silver stated the untimely death of Kobe, saying, "The NBA family is devastated by the tragic passing of Kobe Bryant and his daughter, Gianna. ... We send our heartfelt condolences to his wife, Vanessa, and their family, the Lakers organization and the entire sports world."

During the crash site on the hillside of Calabasas city, there were over 25,000 people came up to see the terrible incident which took the lives of nine people, including four-time All-Star MVP, Bryant, and daughter's life. As per sources, a community college baseball coach, John Altobelli, his wife, and two daughters, Keri and Alyssa Altobelli also passed away while reaching their destinations.

Other than this, the 62nd Annual Grammy Awards gave a tribute to Bryant's demise at the beginning of their show at STAPLES Center, Los Angeles, CA at 6:45 am on 27th January 2020, where Kobe won numerous championships. On the same location, the late Bryant's fans gathered and prayed for his life to eternity.

After the death of former NBA superstar, many famous singers, actors, and politicians were in shock and posted heartfelt condolence upon Bryant's demise. The 44th U.S. President, Barack Obama tweeted on his Twitter account where he said,

"Kobe was a legend on the court and just getting started in what would have been just as meaningful a second act. To lose Gianna is even more heartbreaking to us as parents. Michelle and I send love and prayers to Vanessa and the entire Bryant family on an unthinkable day."

More to this, a radio personality, Ryan Seacrest arrived at the Grammys red carpet with giving a tribute to Bryant's death. The tragic news also touched the hearts of Bryant's beloved friends, including Alicia Keys, Kevin Hart, and Will Smith, among others.