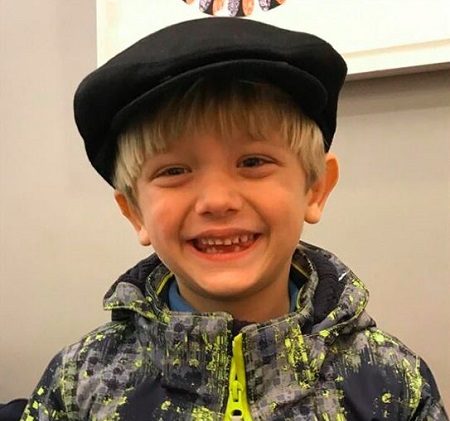 Tristan Milos Trump is a celebrity child who has gained fame since his birth. Well, he is best known as the third child and second son of Donald Trump Jr. and his divorced wife, Vanessa Trump. His dad Trump Jr. is a business and former reality TV star while his mom, Vanessa is a socialite, actress and former model.

He was born on October 2, 2011, in New York City like his other four siblings. He is the grandson of 45th U.S. President, Donald Trump, Ivana Trump, Bonnie Haydon, and Charles Haydon. His uncles are Barron Trump, Eric Trump and aunts are Ivanka Trump, Tiffany Trump, Veronika Haydon.

He Has Four Siblings

Tristan, aged, 8 must be enjoying his childhood along with his two brothers and two sisters in the United States. His oldest brother Donald Trump III was born on February 18, 2009, while his oldest sister Kai Madison Trump was born on May 12, 2007.

Spencer Frederick Trump who was born on October 21, 2012, is only slightly a year younger than Tristan. His little sister Chloe Sophia Trump was born on June 16, 2014. Since their parent's divorce, the five siblings live together along with both of their mom Vanessa in Manhattan and with dad Donald in New York.

Further, Tristan has a cousin of the same age named Arabella Rose Kushner, born on July 17, 2011, to Ivanka Trump and husband Jared Kushner. Also, from Ivanka's side, he has two cousins named Theodore James Kushner, 4, and Joseph Frederick Kushner, 6. On the other hand, Milos' cousins are Carolina Dorothy Trump, 1, and Eric L. Trump, 2, from his uncle Eric's side.

When His Parents' Vanessa and Trump Had Divorced?

Now, talking about his parents' relationship, they are no longer together. They initially started dating in around 2003, at Trump Jr.'s father suggestion. Two years later, they exchanged the wedding vows on November 12, 2005, in Palm Beach, Florida at the Mar-a-Lago estate.

Their wedding was officiated by Trump Jr.'s aunt, Judge Maryanne Trump Barry. Trump Jr., aged 42 proposed to Vanessa Kay with a $100,000 ring which was received from the jeweller's store in a New Jersey mall. Together they have five children.

But March 15, 2018, it was reported that they had parted their ways after being married for around 13 years. Vanessa had filed for an uncontested divorce in court Manhattan Supreme Court but later it was stated that the divorce was contested.

In July 2018, the two declared that they resolved a child custody issue and their divorce was finalised at the end of 2018. In a joint announcement, they said: “We have decided to go our separate ways.”

Raised to celebrity parents, Tristan Milos Trump enjoys a lavish lifestyle along with his wealthy parents in the United States. Similarly, Stormi Webster is another celebrity kid who enjoys her parents' assets.

Meanwhile, his dad, Donald Trump Jr. enjoys the whopping net value of $300 million. He has accumulated his fortune from his career as Executive Vice President at the company, The Trump Organization. Whereas his other, Vanessa has a worth of more than $100 million.

Apart from that, Don Jr. bought a mansion in the Hamptons for $4.5 Million which consists of 7-bedroom. Also, he owned the 6,000 square-foot apartment in Manhattan costing around $4.2 million.