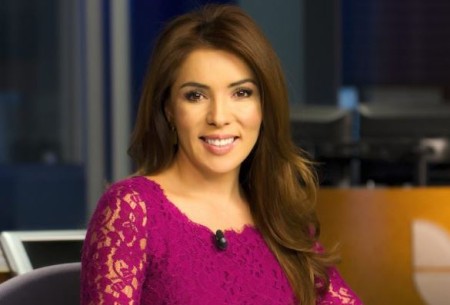 Tsi-Tsi-Ki Felix is an Emmy Award-winning Mexican broadcaster who is the host of "PoliticaYa," a national politics show in Washington DC and the news anchor for Univision Washington Newscasts. She has been working for Entravision Communications since 2015. Also, Felix worked as a lead anchor for WSNS-TV/Telemundo Chicago and has hosted radio shows.

Tsi-Tsi-Ki-Felix was born on February 25, 1979, in Michoacan, Mexico. As she belongs to Mexican ancestry, the meaning of her name is a flower. The oldest of four girls, Tsi-Tsi-ki, moved to the U.S at a young age of 15. She graduated from DePaul University in Chicago, Illinois.

The 41-year-old, Tsi-Tsi-Ki Felix prefers to keep her personal life very secret. It seems she is a single woman as of now. She is currently not married and doesn't have any children. However, Felix previously has tied her wedding knot. She was married to a fellow broadcaster named Rafael Romo.

it is said that Rafael helped Felix get her start in Chicago radio and television. She moved to Chicago at age 20 and was married to Rafael at the time. There is not much information about when the couple got married. As per some sources, Felix and Romo divorced after six years of a marital relationship. They didn't have any kids.

Rafael Romo currently works as the Senior Latin American Affairs Editor for CNN Worldwide. He is the former WBBM-TV and WGBO-TV reporter/anchor. It is not known if he is on good terms with Felix as of now.

The Washington D.C based new anchor, Ms. Tsi-Tsi-Ki Felix, has a net worth of $1 million as of 2020. She has been active in the journalist industry since the age of 16. Throughout her 25 years of long professional career, Felix has worked for several radio and television networks. Therefore, she has made a decent fortune from her profession. Another anchor, Kaity Tong, also has a decent net worth.

On average, Tsi-Tsi-Ki earns an annual salary of over $53,347. The earnings for television anchors range somewhere between $37,124-$123,876 per year. Before becoming a news anchor, Felix reported weather. While she worked for Telemundo Chicago, Felix used to earn around $48,126 per year.

Felix also serves as a member of the Board of Directors for the American Cancer Society. Apart from her career, she is passionate about giving back to her community.

One of the well-liked international news journalists, Tsi-Tsi-Ki Felix, has been recognized for her work with prestigious awards. She has received multiple Emmy Awards, including TV News Emmy for "Outstanding Achievement by a News Anchor" in 2016.

Likewise, Felix received the “Best Spanish News Presentation in Radio,” given by the Achievement in Radio Awards. In 2012, she received the Peter Lisagor Award for “Best Foreign Newscast in the Midwest. Further, Tsi-Tsi-Ki won the “Enterprising Woman of the Year Award,” given by the Hispanic Coalition of Independent Media in June 2013.

Tsi-Tsi-Ki moved to the U.S. at 15 and began her career with radio shows. She worked in radio reading early mornings traffic reports. In 2001, Felix joined Telemundo Chicago as a fill-in reporter. The same year she became the station's weather anchor.